Students from outside Toronto can still vote 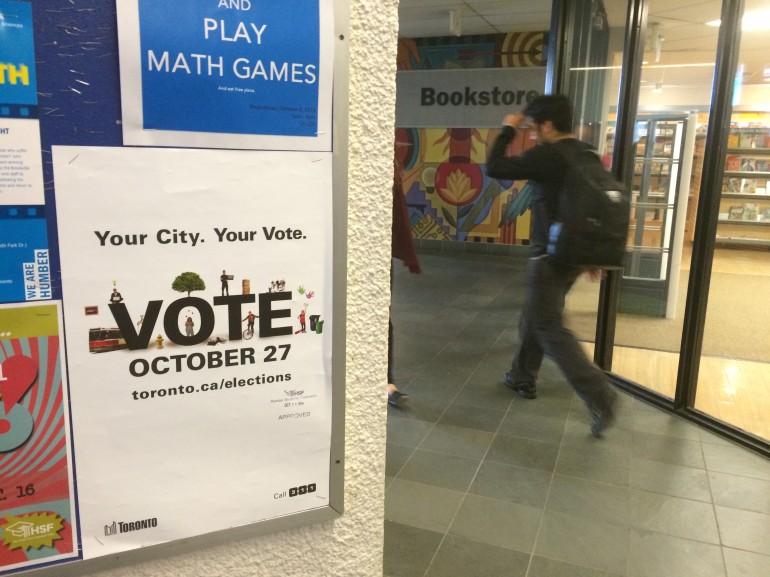 Six days of advance polling for the municipal election in Toronto starts Oct. 14.

Those who miss the advanced polls will have to wait until Oct. 27, election day, to vote.

What some may not know is students whose permanent residence is not in Toronto can still vote in the city. According to the Municipalities Act, students from outside Toronto but renting in the city can vote here and at home.

All one has to do is prove their Toronto residency in order to vote.

“If they’re living on residence we are in the works of providing a letter to rez life,” said Nick Macaro, public engagement election coordinator. “There they can get a letter of residence.”

For those living off campus a rental agreement with the landlord or a utility bill is acceptable as identification. To see the complete list of identification accepted see the elections website.

Voters have to vote at a polling station where they live. Macaro encourages voters to use MyVote online to get their voting information.

“They just enter their address, then it will show if they are on the list, when and where to vote, the candidates running in their ward and a sample of their ballot,” said Macaro.

The youth vote is important in the upcoming election.

“The issues that are in this election impact everyone,” said Dan Allen, Student Vote research and communications coordinator. Student Vote’s goal is to get youth interested and knowledgeable in politics.

Nineteen-year-old mayoral candidate Morgan Baskin said it’s important for people to be involved in their forum.

“Voting is a way of showing up and saying that you matter and that you’re here,” said Baskin. “Politicians pay attention to those who vote, saying, ‘I need to be a part of the solution.'”