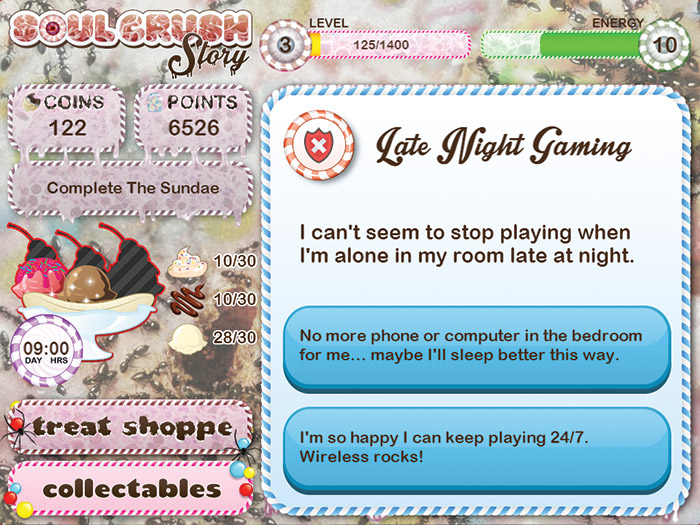 The game, released by the Centre for Addiction and Mental Health and the Problem Gambling Institute of Ontario, emphasizes extreme consequences of video game overuse.

“Players actually play a game that takes about ten minutes,” she said. “They have choices to either play or engage in a real life activity and the consequences of their choice are exaggerated and meant to be comical. It’s a way for people to explore some of the benefits and consequences of gaming, in a format that is familiar to them.”

“The games are designed to be very compelling and hard to walk away from, that can certainly allow people to spend more time doing that than other less desirable activities like homework or chores,” she said.

Players even more susceptible to the reinforcement video games can provide are the people who get most addicted, said Pont.

“In particular users that may have vulnerabilities like depression, or family difficulties, or being bullied at school or self-esteem issues,” she said. “The users get even more hooked into these video games because if they’re good at them they can feel good about themselves while they’re doing them. It’s an escape from some of the more difficult feelings.”

Jones is himself a gamer who plays 20 to 30 hours a week when he has the time.

“In that kind of situation I don’t think you can blame the company at all, they are responsible for releasing a product that people will be entertained with,” he said. “It’s completely and utterly user-based when the addiction actually starts because it’s your decision to play the game for excess hours.”

Pont said gaming over-indulgence could cause significant behavioural problems and severely disrupt the lives of players.

“It can create conflict at home where parents have found out about poor grades or see that their child is online a lot and are concerned about it,” she said. “Being exhausted because they stayed up late gaming can result in missing school, difficulty being able to concentrate at school.”

“It can create distance in their relationships. When there are those kinds of consequences it can create changes in their mood and self-esteem. For example if they’re neglecting school and their grades drop they might feel anxious and bad about themselves and can kind of have an interactional effect,” said Pont.

Jones said he controls his gaming by making sure it is a second priority.

“Gaming comes whenever working is done,” he said. “If I have an assignment and I don’t finish it that night I don’t get to game that night, if I finish it early I get to play games for a bit.”

Pont said that CAMH and the PGIO don’t advocate complete abstinence but want to promote healthy and balanced gaming.

She said having pre-determined gaming time limits, treating gaming as a reward for finishing chores and homework and keeping electronics out of the bedroom are strategies that can maintain a healthy amount of gaming.

Soul Crush Story is available to play for free on the problem gambling website. There is also a facilitators guide for instructors.