Rob Ford back to city hall as Ward 2 councillor 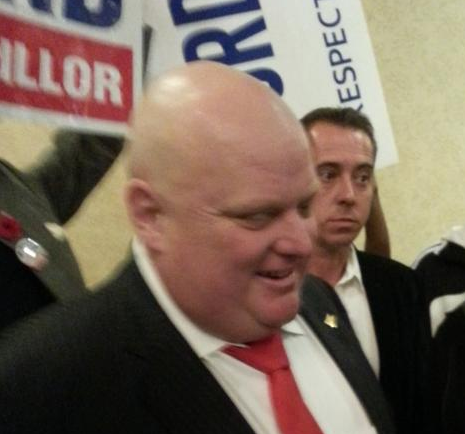 Rob Ford will be back to city hall as councillor of Ward 2 – Etobicoke North. He won against his closest opponents with 58 per cent of the votes. Luke Larocque had 11 per cent and Andray Domise with 8 per cent. The ward had no incumbent and 13 candidates in total were vying for the seat.

Rob Ford, looking frail during the count, addressed a crowd after his win and was seen fist-bumping supporters while “Taking Care of Business” played in the background.

Rob Ford addresses a crowd after being declared the winner in Ward 2. Photo by Adam Stroud

It’s been a controversial year for Rob Ford. After a series of scandals, including an admission to smoking crack cocaine, a number of “drunken stupors” and finally going to rehab, Ford’s mayoral capabilities were called into question and captured headlines worldwide.

Elsewhere in Etobicoke, the results came in as no surprise.

Vincent Crisanti, who was the incumbent, has been re-elected Councillor for Ward 1.

Wards 3 to 5 were open for the taking with no incumbent.

Mark Grimes, the incumbent for Ward 6 (Etobicoke – Lakeshore,) was re-elected as Councillor.

It was his recent cancer diagnosis, though, that led him to drop out of the run for mayor in this election. His brother Doug Ford stepped up to take his place and run for mayor, but lost to John Tory.

In Wards 11 and 12 (York South – Weston,) both incumbents, Frances Nunziata and Frank Di Giorgio were re-elected as Councillors.