Quebec radical kills one Canadian soldier, injures another in hit-and-run 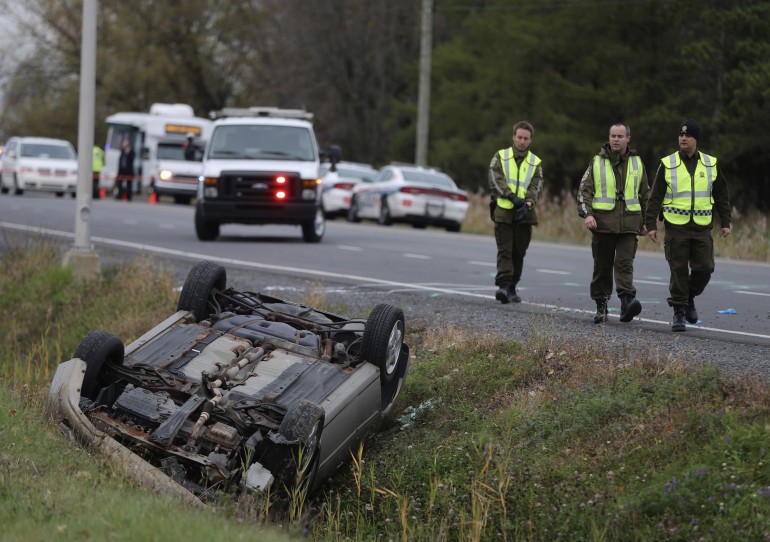 Surete du Quebec officers investigate the vehicle after two Canadian soldiers were injured in a hit-and-run in Saint-Jean-sur-Richeliieu, QC. Photo by Reuters

A 25-year-old Quebec man was shot and killed by police on Monday after running down two Canadian soldiers.

The hit-and-run took place in Saint-Jean-sur-Richelieu, Que., about 40 km southeast of Montreal.

Sureté du Québec said the soldier, identified as Patrice Vincent, 53, later died in hospital. The injured soldier’s name was not released by authorities.

The driver has been identified as Martin Couture-Rouleau, a resident of the area and someone who the government has described as “radicalized.” He identified himself on Twitter as Abu Ibrahim AlCanadi and as Ahmad Rouleau.

Pursuing police followed Couture-Rouleau’s car after the attack and shot him when he emerged from the car threatening officers with a knife.

In a statement that followed the events, Prime Minister Stephen Harper said Couture-Rouleau was known to federal authorities.

A neighbour who wanted their identity concealed spoke with Reuters about Couture-Rouleau, saying the man had recently become involved with Muslim extremists.

Deputy Director of the Canadian Security Intelligence Service Jeff Yaworski said on Monday the agency was concerned with people returning to Canada who have “engaged in threat-related activities.”

Monday’s attack is the first in Canada since the country joined the fight against ISIS on Oct. 7.