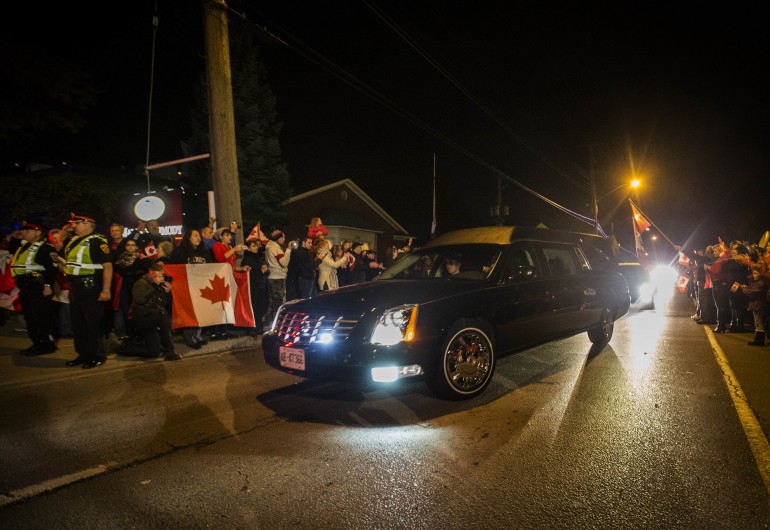 It was an emotional night for Jim Cirillo, Cpl Nathan Cirillo’s uncle, as he stood across the street from the James Foote Armoury in Hamilton. He stood remembering the life of his nephew, while hundreds of people brought flowers and waited for the body of his nephew to come home.

Nathan’s uncle, Jim Cirillo said, “I would swear that the day he was born, he was born a soldier. He started with the cadets. When he was young he got into the cadets, and then he got into the army. And I always told him are you sure that’s what you want to do? There’s a lot of bad stuff going around the world, it’s pretty dangerous to be a soldier. And he said that’s all he’s living for, is to be a soldier , to be in the army. He wanted to be in the army. That was his life.”

The largest memorial for Cpl. Nathan Cirillo can be found at the James Foote Armoury in Hamilton, where hundreds of tributes and heartfelt condolences have lined the sidewalk.

Hundreds of people have flocked to the armoury at 200 James St. North, Hamilton, leaving behind a river of flowers, cards, flags, candles, stuffed animals and other tributes and condolences outside of the building.

The shootings in Ottawa has binded Canadians closer together. The front page of Toronto Sun and a Canadian flag were taped and tucked into the gated entrance way of the James Foote Armoury at 200 James Street North.

“He died a hero. And the other soldier that chased the shooter…, he didn’t have a gun on him, and he chased the shooter,” said Jim Cirillo, Cpl. Nathan Cirillo’s uncle. “That’s Branden [Stevenson]. [He’s] from Stoney Creek and Branden, Nathan and my son they hang out together on occasions, sleepovers and things like that. So Braden must have been pretty brave to chase the shooter, who had a gun, and he didn’t have no weapon on him and he went after the shooter. I mean that takes a lot of courage. So even Brennen is a hero himself as well too.

This mother helped her son write on a flag taped to the wall of the building as she exlplained to him why it was important to pay respect to the fallen solider.

When asked about Cirillo’s son, Jim said, “He’s five years old; I don’t think he’s grasping much of this.”

The death of Cpl. Cirillo has touched the hearts of all Canadians, as strangers, friends and family comfort each other in the crowd of people outside the armoury.

“One of his two sisters is expecting a baby second, it’s probably gonna pop out tonight. Nathan’s mother… her son has passed away and there’s going to be another baby coming,” siad Jim Cirillo.

This young girl and her father walked slowly down street, looking at all the condelnces, eventually stopping to put down a card and flowers.

“One of his two sisters is expecting a baby second, it’s probably gonna pop out tonight. …Nathan’s mother …  her son has passed away and there’s going to be another baby coming,” said Jim.

“Maybe there is a reason all behind that we just don’t see,” said Jim. “Maybe on the other side of death there is something beautiful, and they’re probably looking for some good people, and they took him.”

A young man gets on his hands and knees to sign one of the several flags that have been taped to the armoury wall or on the sidewalk.

Hundreds of people and media crowded in front of the armoury to pay their respects.

“…he was good at, in sports. But he was a good human being. I’m telling you that not as an uncle but as a human being, I think Canada and the world lost one special human being, said an emotional Jim Cirillo.

The Winters family flew from Red Deer, Alberta, earlier in the day because their grandmother died. They came out to pay their respects to Cpl. Nathan Cirillo because, “He gave his life for his country,” said Joe Winters. Joe and his sister Melanie Winters held the flag up to welcome home Cirillo’s body.

The hearse carrying Cpl. Nathan Cirillo’s body moved quickly down Main St. in Hamilton, as it made its way to the funeral home. Hundreds lined the street to welcome home the body of the fallen solider.