Olivia Chow fights to the end 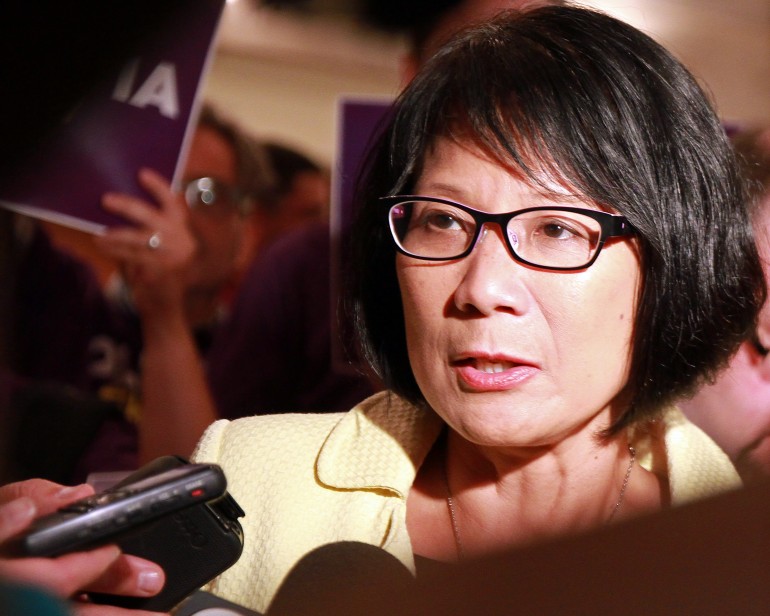 Olivia Chow fought until the bitter end with a third place loss in the Toronto mayoral election. She conceded defeat in a heartfelt speech where she congratulated John Tory for running a great campaign, working hard, and praised his commitment and determination. She reiterated the main issues that still plague our city, such as poverty and city gridlock, and said Tory now has the chance to make positive changes for Toronto. After thanking her volunteers and wishing Rob a speedy recovery, Chow exited graciously.

Tells supporters she’s going to keep asking what she can do with each other for each other pic.twitter.com/qdHPStXRri — Kathleen Jolly (@JollyKathleen) October 28, 2014

Some Chow supporters are dealing with the loss through humour. “Don’t worry, it’s only four more years,” shouted a bystander in the busy crowd. Supporter David Morris reacts to disappointing results. “Was it entirely unexpected? no. Was I hoping that there would be some miraculous error with all of the polls that were going on? A little bit,” Morris said. Chow supporters stay quiet as CP24 says Olivia Chow has no chance of winning this election. Chow’s campaign manager John Laschinger spoke to Humber News reporters after the crowds dispersed.

He praised Chow for her passionate and caring attributes. “I’m really proud of Olivia, she carried issues that mattered to the people,” said Laschinger. In a loss like this he said “you redouble your efforts, you do some research, you find out what’s gone wrong and try to react to it.”

This whirlwind campaign threw Laschinger many curveballs. Alot of things happened that were beyond his control. “This campaign had a number of cannonballs dropped into it. Ford left to go to rehab, he came back, then he got sick, his brother came in…peoples motivations changed, people were looking for different things. There was a big sympathy vote obviously for the Fords. Rob’s got his challenges and we all wish him well,” he said.

Knowing the final result of Chow’s loss Laschinger said he will sit down and try to figure out what went wrong.

“I’ll sit down and do some postmortems after this is over and try and figure out what we could have done better. We obviously didn’t run a perfect campaign because we didn’t win. But we ran a campaign that we’re proud of, we had more donours, more volunteers than anybody else, I’m proud of the team Olivia and I put together…maybe another time,” he said.

Chow supporter Michelle Nguyen, 26, met the candidate at a book signing and felt connected to her story. “It sparked an interest in me to get to know the campaign and what she stands for a little bit more,” she said. “She’s the only candidate that cares about the city, that will actually put 101 per cent effort in everything she does for the city.”

Julia Dodge, a Chow supporter and regular biker in downtown Toronto said, “it’s really dangerous right now, so I really appreciate that she’s the only candidate looking into that.”

Chow didn’t work alone. Her campaign team is extremely proud of what they worked on. Digital Director of Chow’s campaign Jennifer Hollett talked about the importance of social media.

“(Olivia Chow’s social media) is six times John Tory’s. Doug Ford was late to the game so it’s almost unfair to compare.” she said. Hollett said they have 65,000 followers on their Facebook site, as well as another 65,000 on Twitter.

“Social media is a conversation in this community…we are able to build something on social media then take it out into the streets and turn that into votes for today,” Hollett said.

As a frontrunner until mid-summer, it seemed Chow’s chances of winning were strong. Polls consistently placed her support in the high 30s reaching as high as 40 per cent. According to Forum Research polls, her support started to dip and then plummet in July. Since the beginning of August, Chow has been polling consistently ten or more points behind leading candidate John Tory, hovering in the low 20s. As a former NDP member of Parliament from 2006 until she joined the mayoral race earlier this year, and a former city councillor from 1991 to 2005, Chow has an extensive background in Canadian politics and strong ties to the city of Toronto. Chow is also the widow of former NDP leader Jack Layton who died of cancer in 2011.

Platform: “For a better city”

Transit has been one of the top issues in this campaign. Chow’s campaign says their plan for a boost in bus service and a subway relief line is the most realistic and practical.

Her official website said 60 per cent of TTC riders are above ground. She promises to invest $15 million a year, starting immediately. She planed to order new busses (a $184 million investment) that would be paid for through a new progressive land transfer tax. Chow’s campaign tended to focus on social issues, such as childcare and creating jobs for young people. She vowed to expand after-school recreation programs and invest in families to help kids grow. Chow also wanted to break the endless cycle of young people unable to get jobs due to lack of experience. Her plan was to require companies with large city contracts to hire and train young people, setting an initial target of 5,000 new apprenticeships and jobs for young people over the next four years. Chow was consistently vocal about her support for the arts and wanted to increase funding. She sees economic benefit from cultural activities in Toronto such as the Caribana festival, Toronto’s Gay Pride Week and the Toronto International Film Festival.

Being the only minority, female and immigrant candidate, Chow has faced personal attacks during the campaign. In a mayoral debate in September, a man in the audience shouted, “Go home, go back to China,” before identifying himself as a Ford supporter. At another debate, an audience member questioned her immigrant status suggesting that her origins make her less than qualified to be the Toronto’s mayor. Chow also faced personal attacks online on social networks. A Toronto Star article released on Oct. 2 said that out of all the candidates, Chow has been getting the most abuse on Facebook. The Star investigation showed that since Chow announced her campaign on March 13 more than 1,700 racist, sexist and otherwise offensive posts have been removed from her Facebook wall. On the eve of the election The Toronto Sun posted a political cartoon that sparked heated debate. https://twitter.com/ddale8/status/526529361969938432 The cartoon shows Chow literally riding on Jack Layton’s coattails in Maoist attire and has been criticized for its stereotypical depiction of her Asian descent. In a recent interview Chow said, “Because I am Chinese-Canadian, I must be a communist and have slanted eyes and glasses … and since I am a woman, I must be inferior and therefore not good enough for the job of the mayor so I must rely on my deceased husband so it’s both racist and sexist.” An outpouring of Twitter comments show that most people consider the cartoon insensitive, but others defend the work as fair game. Either way, Chow has been facing verbal attacks until the very end of the race.