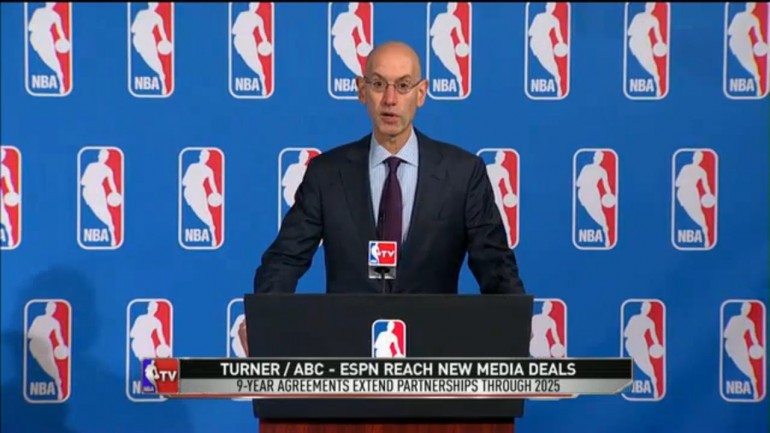 The NBA has officially announced a new 9-year, $24-billion TV contract with Time Warner Co. and Walt Disney Inc. during a press conference on Monday.

The contract, starting in the 2016-17 NBA season, will give media rights to Turner’s TNT and NBA TV, as well as Disney’s ESPN and ABC through to the 2024-25 season.

The agreement will bring in a whopping $2.66 billion annually. This amount is nearly triple the current contract which brings in only $930 million.

See highlights from the news conference:

Christopher Walder, a featured columnist who covers the Raptors for Bleacher Report, said this increase is a good step forward and it will have major affects.

“I think its great for the league, just the price increase itself is good,” said Walder.

NBA superstars such as LeBron James and Kevin Durant will become free agents around the time the new contract is implemented and will be expecting large amount of money, said Walder.

According to a statement on NBA.com, the league will have an all-time high of $63 million cap space this year. However, it is expected to reach an astonishing $88 million two years from now.

As for individual teams, “its good for the MLSE (Maple Leaf Sports Entertainment owner of Toronto Raptors) who will be more important with massive deals,” added Walder.

Ameer Ally, an accounting student at Humber College, is a long time fan of the Toronto Raptors and said he’s excited for what the future holds for them.

“I’m looking forward to who we (Raptors) can get to join us, I’m really hoping we could get (Kevin) Durant,” said the 20-year-old.

NBA Commissioner Adam Silver said that he would have a meeting with the NBA Union Monday afternoon and discuss how the money will be distributed to teams. Silver stated the money would be “smoothed out” over years to come, to make contracts fair for those players that will not be free agents soon.

ESPN/ESPN2 and ABC will now cover more WNBA, Summer League and NBA developmental league games. More online streaming opportunities will be available for those who don’t have cable or satellite TV.

TNT and ESPN have been working on the contract since February, said Silver, and they wanted to make the deal before the deadline approached.