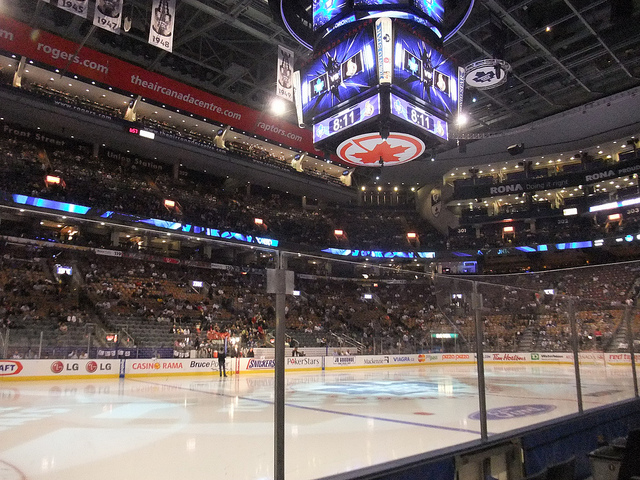 The Air Canada Centre prepares for some major changes in 2014-15 with puck drop just around the corner.

Out with the old and in with the new.

The fan experience at the Air Canada Centre is getting a major facelift in the wake of the Leafs’ 2014-15 season.

The bulk of the change is a $1.5-million dollar projection unit that will hang over the ice. The 3D projector will be able to paint lines, show animated images and even create team specific effects, such as a Maple Leafs logo stitching together.

The changes are aimed toward satisfying the educated hockey fan. Substituting goalie races, slingshot hockey or other quirky gimmicks will be projected during intermissions for replays and game highlights.

“You can’t beat the experience of going to a live sports event,” said Dave Haggith, senior director of communications for Maple Leaf Sports Entertainment. “Leafs fans are supportive and educated, and we want to connect them with their team as much as possible.”

Currently, nine other teams in the NHL use projection screens in their arenas, including the Leafs’ biggest rival, the Montreal Canadiens, whose ice at the Bell Centre is simulated to be set on fire before each game.

Leafs’ new President Brendan Shanahan is at the forefront of the change as he is trying to build a true home-ice advantage that has been lost since the days of the old Maple Leaf Gardens.

Even some junior teams like the Halifax Moosehead of the Quebec Major Junior Hockey League uses the same technology.

Scott MacIntosh, the Moosehead’s manager of media relations and communications, wasn’t around when they used projections in the post-season last year, but has experienced it before.

“I think this type of thing will be amazing for Leafs fans,” said MacIntosh. “Getting out to see a hockey game is great, but with an added projection screen it will make the fan experience that much better.”

Jonathan Bernier stops a shot fired by a Detroit Red Wing in a pre-season game.

Time will tell how Leafs fans will react to the changes at the ACC. However, all signs are so far positive, even when talking to a Canadiens fan who lives in Toronto.

“I’m not a Leafs fan even though I live here,” 26-year-old Kaylene Joseph said with a laugh. “But all the stuff they do with projections at the Bell Centre is amazing and it really does add to the experience… If that sort of thing is coming to Toronto then Leaf fans will enjoy the new experience.”

Tomorrow night is the night hockey fans have all been waiting for: the start of the 2014-2015 season. The Leafs will kick things off against the Montreal Canadiens at 7 p.m. at the Air Canada before Sidney Crosby and the Pittsburg Penguins come to town on Saturday night.