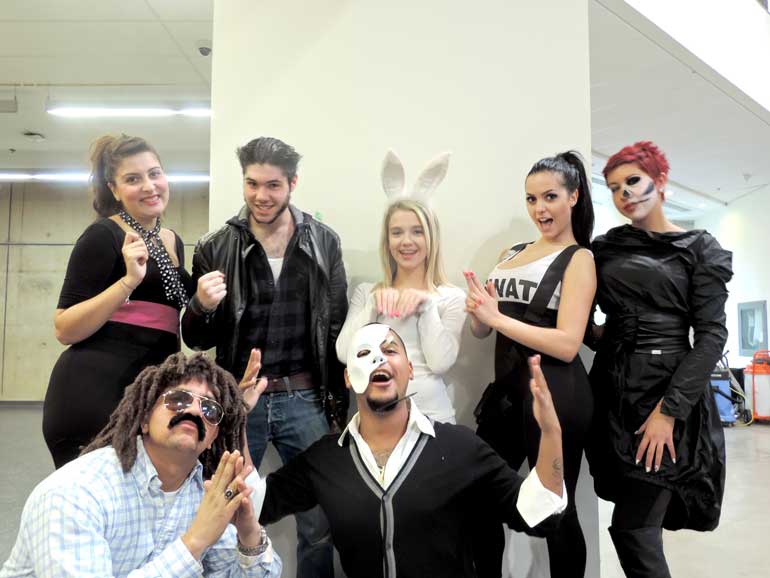 By: Shaneza Subhan and Jessica Lad

Humber students got into the spirit of Halloween and celebrated by roaming the halls of Humber in their creative costumes. Humber News decided to capture their fun and interesting get-ups below.

Aaron Ffrench, first year business student hopes to convert as much evil to the good side today

Valentina Bussolotti (flower girl) and Laetitia Verville (dead student) are both first year 3D animation students at Humber College who are in the spirit of Halloween and can’t wait to scare up a storm today.

Bilal Karolia, 21, Toronto, came to school as Jack Skeleton from A Nightmare Before Christmas, with his girlfriend, Denise Lord, 19,  Mississauga, who came as a ladybug.

They are both in their first year of broadcasting and have been dating since Oct. 30, 2013.

Shun Naito is a first year animation student, who loves to just hang out the cafeteria.

Michael Raffanell plans to swoop through the halls of Humber this Halloween.

Tryus Mcintosh is a first year Media Foundations student who plans to swing his way through the hallways of Humber today. Look out! Here comes Spiderman.

Alex Stoupenkov is a first year film student. He came to school today as Snake Plissken from the movie Escape from N.Y.