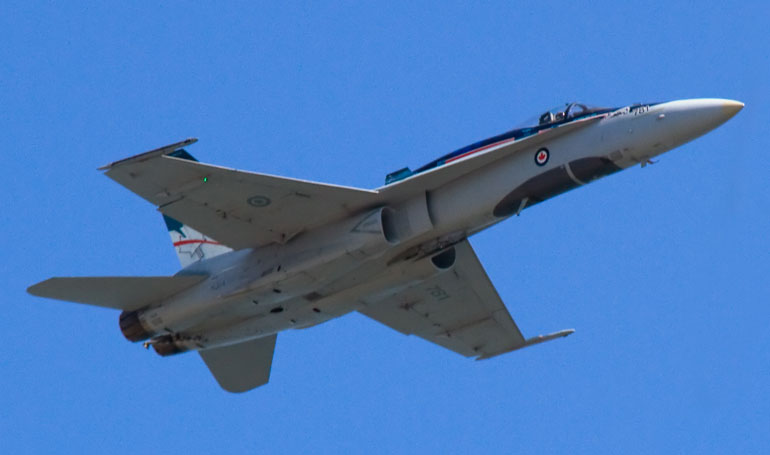 By Casey Taylor and Hannah Hollingsworth

Prime Minister Stephen Harper is expected to announce Friday what Canada’s combat role in the US-led coalition against the militant group ISIS will be.

Harper is expected to make the case for the deployment of Canadian CF-18 fighter jets to join in coalition airstrikes already underway.

The Prime Minister spoke with his caucus Wednesday on the nature of the announcement and heard no objections, reports say. In fact, there are reports that some MPs were overheard wondering if Canada will be contributing enough to the efforts.

Harper is also expected to send CC-150 refueling jets along side the fighters.

Canada is getting 2 CC-150 refuelling jets ready as part of combat mission against #ISIS. Jets provide refuelling for CF-18 Hornets.

Friday’s announcement is set to come following days of speculation after it was reported Canadian officials had been in contact with American counterparts to ask how they could contribute to the operation.

Harper has since denied that Canada had made first contact and revealed the U.S. had been the one to ask for support in a question and answer session last week in New York. Canada already has 26 soldiers serving on a 30-day mission as military advisors in Iraq. That mission is set to end Saturday.

The Conservatives have been under pressure from the opposition lately in the House of Commons to let Canadians know what their role will be past that date. Harper has said that any military role in Iraq would be proposed to the House for a debate and vote.

Simon Palamer, a researcher with the Center for International Governance Innovation’s Global Security and Politics program, told Humber News that Parliament is not required to vote on military deployments, but the Conservative government has regularly brought combat proposals for a non-binding vote.

The Prime Minister’s rhetoric in the House in the lead up to Friday’s announcement has been hinting a decision was soon coming.

“We have at the present time the establishment of a quasi-state, an Islamic caliphate stretching from Aleppo almost to Baghdad, Mr. Speaker, up until very recently operating entirely in the open, planning attacks – not just genocide in the region, but planning attacks in this country,” Harper said in the House on Tuesday.

“We will work with our allies on a counterterrorism operation to get us to the point where this organization does not have the capacity to launch those kinds of attacks.”

Palamer said whatever commitment Canada makes to the coalition “would be a small contingency.”

He said if Canada sends CF-18s to Iraq it would likely be less than five. “It would be a show of political support,” he said.

“It wouldn’t change the course of the conflict, but it would have an important effect.” Palamer said that Canada’s air force would be there for more than offensive airstrikes.

“We’re not a big country when it comes to foreign policy so we can’t throw too much military might around.”

He said the conflict in Iraq could turn into a protracted one.

Former Canadian prime minister Jean Chrétien has said previously that the actions the Canadian government has already taken have put the military ‘all-in’ on the conflict. Palamer said although any viable plan he’s seen involves boots on the ground, there’s zero appetite in the West for sending ground troops.

That being said, Palamer said there’s still risk to soldiers sent to participate in airstrikes.

“There’s always a risk for the loss of life in any military involvement,” he said.

But Palamer said the risk in Iraq is much lower than if the mission was in Syria.

“You can’t win a war or fight a conflict or hold territory with air planes,” said Jardine.

He said that if things got worse, the nation that would be forced into a combat role would be the US while other nations would likely be able to continue to provide mentoring, supervision and logistical support.

In an older video posted on YouTube shows a Canadian CF-18 prep, take off, refuel mid-air, and test fire.

Canadian CF-18s in need of repair

The Canadian CF-18s that are to be sent to Iraq are part of an aging fleet of aircraft and have been subject to some ridicule.

Canadian Forces CF-18s first took to the skies in 1982. The fighters have been used in NORAD patrols and saw combat in the Gulf War, the Kosovo War and in contribution to the Libyan no-fly zone.

The Canadian Government announced in 2010 that they would be replacing the aging fleet with F-35 Lightning II fighters with the first of the deliveries to begin in 2016. The Conservatives abandoned to plan in 2012, however, because of rising costs. The F-35 is still being considered as a replacement for the CF-18s which have been granted extended life through 2025.

Palamer said the age of the fighters shouldn’t be an issue in Iraq.

Palamer said the mission in Lybia was different in that the no-fly zone allowed them the security of having good intelligence on all surface-to-air missile sites. He said the mission in Iraq would not offer that same security because ISIS could be in control of much the same hardware as what was used in the downing of a commercial commuter plane over eastern Ukraine.

In a video released earlier, ISIS militant Abu Muhammad Al-Adnani called on supporters to attack civilians in coalition countries. The video made specific mention to the United States, Australia and Canada.

Since then, Australian authorities arrested six people in what they identified as an ISIS-inspired plot to behead civilians. Another man was killed in an attempt to behead an Australian police officer.

Jardine said the threat posed by ISIS has two components, foreign and domestic.

He said the regional threat in Iraq and Syria is very real but the domestic one, at least in Canada, is fairly minimal.

“They don’t have a large organizational presence in Canada and any organization they do have is more oriented towards recruitment than it is at actually launching attacks at this stage,” Jardine said.

The number of people who may be sympatheic to the cause may be higher in Canada than many realize, he said. But the amount of active support is still proportionately small.

Jardine said there are half as many Canadians fighting than Australians despite a population size 10 million people larger.

“In that sense, I think the level of active support in Canada is low,” he said.