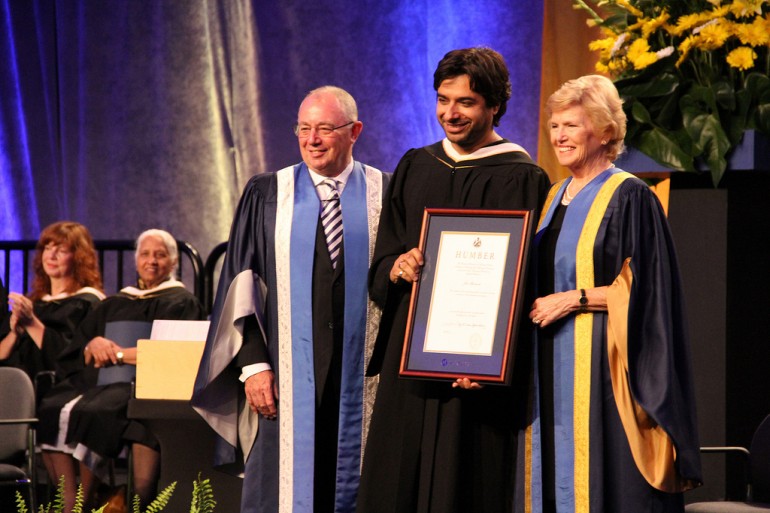 Jian Ghomeshi, former host of CBC Radio’s Q, has been on the other side of the news this past week after losing his job at the CBC and Humber College may be next in line to strip him of a title.

Ghomeshi received an honorary degree from Humber College in the spring of 2012.

However, in light of recent abuse and harassment allegations from eight different women, Humber must consider whether it would like to continue having its name associated with Ghomeshi.

Chris Whitaker, President of Humber College, said he doesn’t see having Ghomeshi’s name associated with the college in this capacity will have a negative reflection on Humber, however he did express some interest in finding out whether or not an honorary degree could be rescinded.

“I’m sure that’s something we would look into depending on what happens,” he said. “Those claims are despicable if that’s true.”

Ghomeshi was honoured prior to Whitaker taking office but based on the criteria for nominating and choosing honourees, Whitaker said Ghomeshi was a likely a valid and warranted choice at the time.

“All you can go on is what you know of the person already that’s in public domain,” he said. “I’m not sure what Jian Ghomeshi’s relationship with Humber is but I think at the time he had a very strong brand at CBC and in Canada and so was a great nominee and probably one of the marquee people at that convocation.”

In an unscientific survey Humber students were asked whether or not they think Ghomeshi should be stripped of his honorary degree should the allegations against him prove to be true. Several students said he should.

“One hundred per cent,” said Sarah Drydale, a first-year Food and Nutrition student. “I’ve been in an abusive relationship and I don’t want someone like that representing Humber.”

“Definitely,” said Aaron So, a second-year Fitness and Health Promotion student. “It’s the same in sports. Think of Adrian Peterson, he’s suspended indefinitely ’cause he beat his kid.”

Other Humber students said Ghomeshi’s personal life should not impede an honour that he was given for his professional achievements.

“You can’t take it away because it is an unrelated issue,” said Avalon Mohns, a first-year Media Communications student. “Maybe if it was a humanitarian award or something you could.”

“He is a professional and we respected him as a professional,” said Oleh Kasynets, a first-year Media Communications student. “He is still a good journalist. You don’t need to think about his personal life.”

The poll of 21 students showed 42 per cent of Humber students think the college should revoke the honorary degree, 33 per cent said it should not, and 24 per cent said they were undecided.

Most recently attention has turned to a Twitter account @bigesarsteddy that allegedly was set up by a Carleton post-secondary student in April 2014 who said she has been abused by Ghomeshi. The account posted the following tweets along with several other accusing Ghomeshi of luring her home, bruising her, and punching her:

BREAKING NEWS: @jianghomeshi keeps an impressive anthology of videos and photos of the young girls he chokes out… #howromantic #rapecultre

Ever wake up wishing you could live a day in @jianghomeshi shoes? All you gotta do is Eat. Sleep. Degrade women. Repeat. Yes. It’s THAT easy