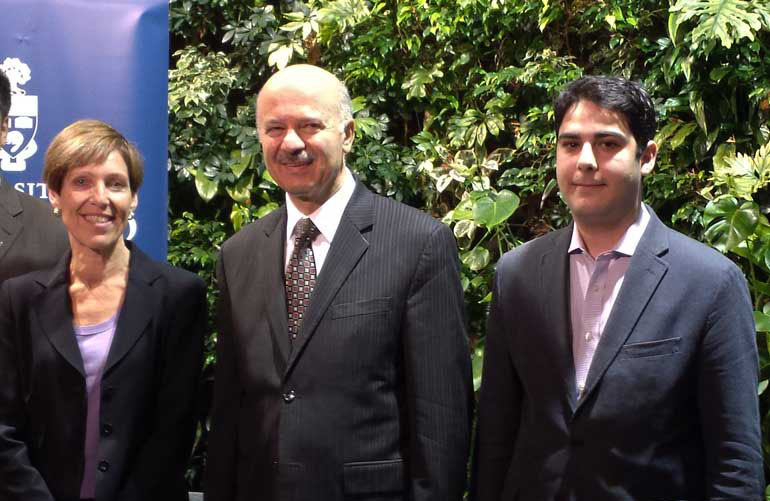 The province announced Friday that they will be extending the Mental Health Innovation Fund, which supports projects designed to improve access to mental health services in post-secondary institutions.

The funding was originally scheduled to end in March 2015.

Mental illness and addiction affects one in five people in Canada. The Canadian Mental Health Association estimates that between 10 and 20 per cent of Canadian youth suffer from a mental illness or disorder, “the single most disabling group of disorders worldwide,” says its web site.

The province will extend the fund for two additional years and will invest up to $6 million each year “to launch projects that will improve access to high-quality mental health services, help identify mental health issues and connect students to support faster,” said Reza Moridi, minister of training, colleges and universities at a media event held in the University of Toronto’s Exam Centre Friday morning.

Lucy Fromowitz, assistant vice-president, student life at the University of Toronto highlighted some of the successful collaboration projects financed by the provincial fund. One of which is a pilot program that’s aim is to help culturally and linguistically diverse and new Canadians access the appropriate services in post-secondary institutions, she said. The pilot program is a collaboration between U of T, Ryerson University, and the Ontario College of Art and Design.

Thought Spot, another project the three Toronto schools have launched, is a live map designed by students that’s aim is to help students find proper health and wellness services in the GTA more easily.

Humber has trained over 700 faculty and staff – more than any other college in the system, said Houghton.

Kaleem Hawa is pursuing a Bachelor of Science degree in international relations and global health at U of T and spoke at the media event Friday morning. Hawa is a strong advocate for mental health and wellness awareness at U of T. He is co-founder of U of T’s Mental Health Action Team and sits on the advisory committee of the university’s health and wellness services. He was also an undergraduate student representative on the committee for developing the U of T Student Mental Health Framework.

“In his spare time, I believe he attends classes,” said Fromowitz as she called him to the podium.

Hawa said his inspiration for getting involved as an advocate for mental health awareness was because of personal experience, and “a shame, really.”

“What mental health (awareness) needs is for people who’ve had zero experience with mental health and don’t really understand the issue,” said Hawa. “We want them to start caring a little bit and that’s why I got involved.”

His ideas for the future of spreading awareness about mental health issues at U of T are to focus on the residence community and to promote awareness among residence leaders, dons and advisers.

“That way we can de-stigmatize help-seeking behaviour because I think, ultimately, students aren’t going to want to talk to an adult about (their issues) or go straight to a counsellor,” said Hawa. “They’ll always go to a friend first.”

Hawa said any amount of investment that goes towards spreading awareness about mental health issues helps.

“This is something that will affect hundreds of thousands, if not millions, of Canadians each year and I think it’s about time we gave it the effort it deserves.”