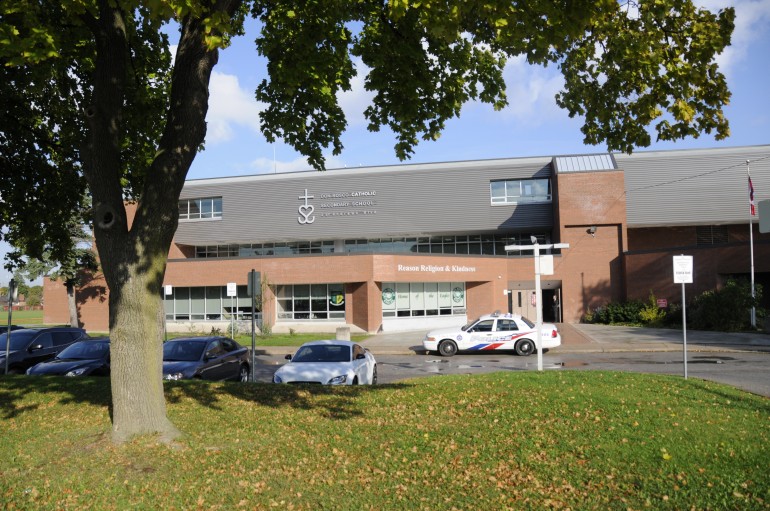 By Karina Nowysz and Adriana Zhang

A sombre mood overwhelmed Don Bosco Catholic Secondary School Tuesday as students mourned the loss of one of their classmates.

A victim from Monday’s shooting behind the Islington Avenue apartment building near Dixon Road — and within sight of Don Bosco — has been identified by friends and schoolmates as Zaid Yousif.

The 17-year-old was one of the two teens shot and killed behind the apartment building. The identity of the other victim, 15, from James Cardinal McGuigan Catholic High School has not yet been released but friends have identified him by his first name, Michael.

A Grade 12 student said he was in the same gym class as Yousif last year.

“He really liked soccer and his favourite team was Barcelona. He was a cool kid,” said the student, who didn’t want to be identified.

Yousif celebrated his birthday on Oct. 2 and posted a picture of his new BMW car on his Instagram account.

@ZaidVilla look at you bro, such a beautiful family, always smiling and happy, your parents are missing you, RIP❤️😢 pic.twitter.com/sWzxoXJpqx

Friends of the unnamed victim also posted messages of sympathy on Twitter and have identified him only by his first name, Michael.
https://twitter.com/_kassxo/status/519268708901191680

The shooting occurred behind 2063 Islington Ave. near the School of Experiential Education.

Police and Toronto firefighters washing down the crime scene/Karina Nowysz

The crime scene has since been cleared by police and the blood was washed down by Toronto firefighters.

Superintendent Ron Taverner said a person who was taken into custody shortly after the shooting was released with no charges.

No weapons have been recovered. Taverner said police are working on a few strong leads and that “this is a solvable case.”

A crisis intervention team is at the school to provide support for students, said Angela Gauthier, Director of Education Toronto Catholic District School Board.

“Everyone is saddened, very dismayed and shocked. Certainly it’s inconceivable that parents have to bury their children, so we’re all coming at it with a very human perspective,” she said.

This is an unprecedented event for this Catholic school community, said Gauthier.

Local resident Dominic Tissi was shocked to hear about the shooting. He said he walks by the school every day.

Others are not surprised, but rather disappointed in the lack of awareness about violence.

“I’m saddened and I’m fed up with it,” said community evangelist, Keaton A., who didn’t want his last name used.

He walked past the crime scene yesterday shortly after the shootings.

“I want (the city) to talk about the violence now,” Keaton said.