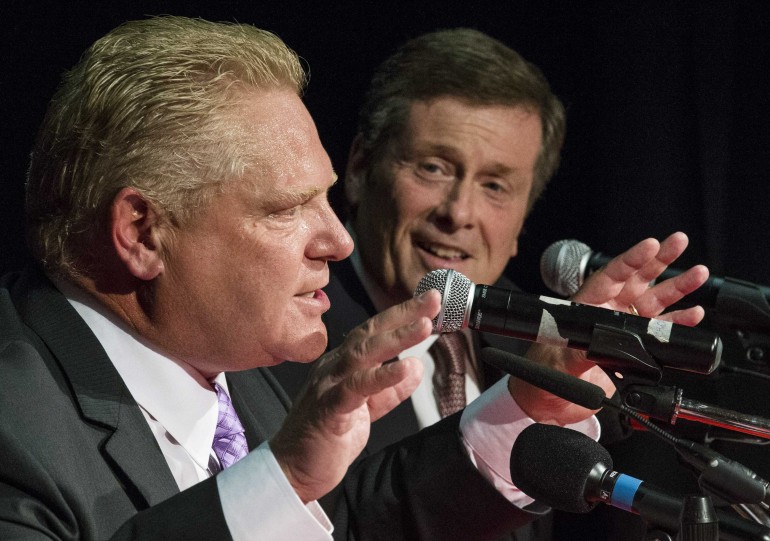 With 20 days left in Toronto’s Mayoral race, John Tory and Doug Ford are ignoring requests by the Canadian Federation of Students to discuss students’ concerns.

The Canadian Federation of Students (CFS) has a province wide campaign known as Generation Vote. Through this campaign students developed a questionnaire asking mayoral candidates to discuss platform commitments in five policy areas.

The exact questions that were asked are detailed in a document provided by the CFS.

CFS submitted the questionnaire to Olivia Chow, John Tory and Doug Ford on Sept. 18 and gave them a deadline to reply by Sept. 26. To date, Olivia Chow is the only one who submitted a reply to the questions.

A full report with all of the answers is expected to be released by CFS in the near future, said Woods.

Woods believes the Tory and Ford campaigns are giving him the cold shoulder because they don’t think students’ questions deserve answers, he said.

While wages are an ongoing topic that are mainly dealt with by the federal and provincial governments, Woods said municipal governments can have a direct impact.

“Cities can commit to living wage policies for city employees,” he said.

“So if you are a city employee, and many students are particularly during the summer, then having the living wage policy set at the municipal level is that the city will commit as an employer to pay a living wage,” Woods said. “Or to commit to pay whatever wage that they believe amounts to a living wage.

“So it’s not the case that the living wage case is asking them to dictate other employers in the area to do that, because we know that they can’t do that. But (we’re) asking them to be a leader in that respect,” said Woods.

In particular, Woods discussed how municipal governments can have a direct impact on child care.

“So again, the issues that we want action on are issues that municipalities have authority and power over, it’s not issues that are solely the responsibility of a different level of government,” said Woods.

Woods said students may not be too engaged come voting time while the two leading candidates in the mayoral race are not directly applying their platforms to students’ concerns.

At the very least the candidates should show some decency and listen to what students have to say, said Wood.

Humber News called and emailed Tory’s and Ford’s campaign teams this morning to comment on their lack of communication with CFS. However, neither have replied.

For those interested in the full interview with Alastair Woods, listen to the audio below. The interview was conducted by Marlon Gomez and Adam Stroud. Adam Stroud wrote and edited this piece for Radio Humber earlier today.