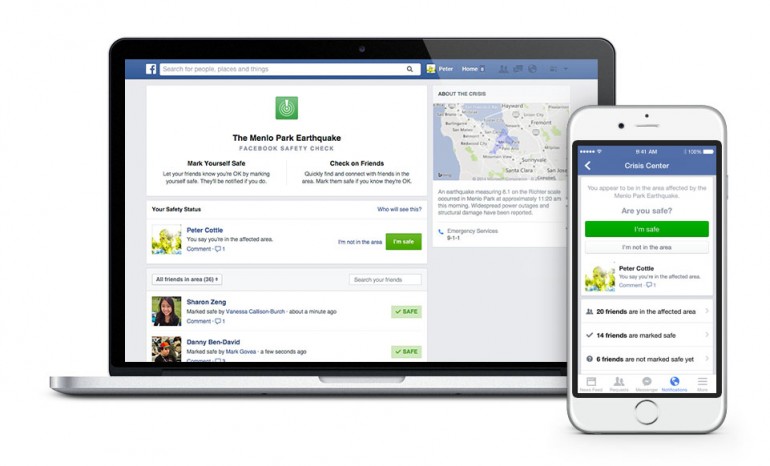 Facebook founder Mark Zuckerberg wants your friends to know more than just what you ate for lunch.

He wants them to know you’re safe.

Safety Check is a new app that Facebook launched Thursday. Its aim is to let users tell their friends that they are safe during natural disasters.

The new app goes hand-in-hand with Facebook’s check-in feature. It allows people to know where you are, and can be as specific as Pearson International Airport or as general as Toronto.

Once downloaded, the new Safety Check app will determine where you lasted used the Internet. If a natural disaster has happened in your area, you will be sent a notification asking if you are safe. There is no option to say no, so you are either deemed as safe or it is unknown.

The app was developed after Facebook’s engineers created a disaster message board in 2011. The board was used to gather information during the 2011 earthquake and tsunami in Japan.

Digital communications consultant Jasmine Goyer, who has been working in her field for 10 years, said this app is an excellent idea.

“I had a few friends in New York City during 9/11 and I was trying to reach them and was worried,” Goyer said. “There was no way of getting a hold of them amidst the chaos.

“A Facebook app like this one could be a way for them just to share if they are safe. You may not know the details but at least you know they are okay,” she said.

She suggested that a collaboration with an organization like Red Cross would be beneficial in calculating the total number of people missing.

People Affected by These Natural Disasters in 2013 | Create Infographics

There are 1.32 billion users on Facebook, most of who use the social networking site on their phones.

“We weren’t always obsessed with news,” Goyer said. “We were all watching it but weren’t sharing it and commenting. Nowadays were all little media feeds. So this is a good time for something like this to be coming out because we are so aware if something happens anywhere in the world.”

Some have tweeted their excitement about the tool.

Bravo @Facebook, #SafetyCheck is a feature that will be very welcome in times of emergency. http://t.co/a1TPf1u9CM — Alex Sherer (@cymcyms) October 16, 2014

While others added their own ideas of the context in which it could be be used.

Really interested in this new #SafetyCheck Facebook feature. Would love to see it expanded for violent situations.

Natural disasters are a part of our constantly changing ecosystem and lives. Millions of people are affected each year due to the difficult living conditions post flood, fire, hurricane, tsunami or earthquake.