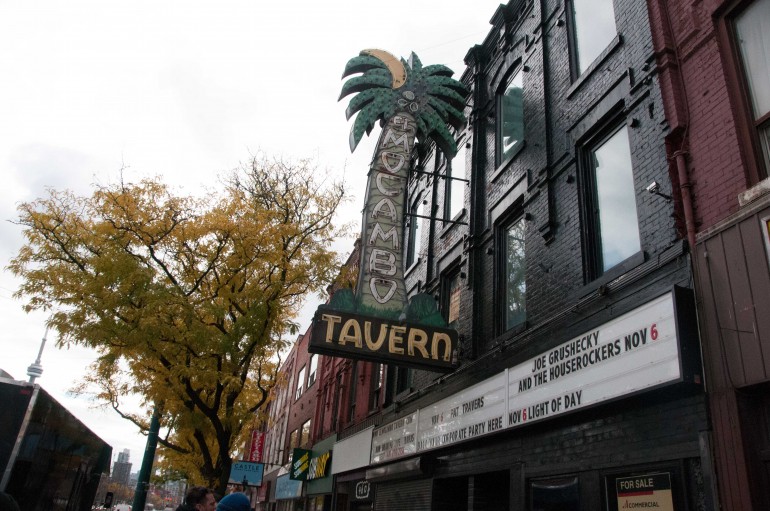 If you’re interested in Toronto’s music scene and history, you may want to head to the El Mocambo Tavern this week as the historic venue and its palm tree neon sign will shut down after Nov. 6.

What the what? “@blogTO: The El Mocambo sign is for sale on Ebay. http://t.co/X03WmUo7iE pic.twitter.com/7WEqhs66pO”

It has been a part of the city for more than 160 years at the corner of Spadina Avenue and College Street and has hosted numerous bands including the Rolling Stones, U2 and The Ramones.

In 1977, Maggie Trudeau was spotted in the crowd at the surprise Rolling Stones show. Scandal erupted and she soon left her husband Prime Minister Pierre Trudeau.

The property is currently in a conditional sale, according to broker Neil Warshafsky.

Co-owner Sam Grosso confirmed he was selling the venue in September.

He said he is sad to sell the venue but he and business partner, Marco Petrucci, are going to move on.

El Mocambo is one of the venues in recent years that has announced it will close along with The Big Bop and Siesta Nouveaux, which closed in 2010 and 2012 respectively.

Another venue, the Guvernment, will close on Jan. 31.

According to Grosso, it is venues such as the Guvernment that are a reason for El Mocambo’s decline in business and upcoming closure.

The inside of the El Mocambo Tavern which will close its doors officially on Nov. 6 (Ari Perlin-Bain/Humber News)

“In this day of the music culture, there’s a lot of DJ’s and electronic music and they’ve taken over business-wise,” said Grosso.

“It’s just a lack of support that’s leading to us closing.”

“El Mocambo, up until the early ’80s, was the only tavern with a liquor license and add that with the acts they were hosting, they were the most popular club in town,” said Bluestein.

“Though other places had more capacity room and became licensed, so if you do four shows at the Mocambo and do one show at another place and end up with the same amount of money at the end of it, of course the band wants to do the one show and make the most money in the smallest amount of time,” he said.

He added that would hurt business for clubs such as El Mocambo which has a room capacity of 400 on both floors of the venue.

The venue’s final show will be hosted on Nov. 6, with the proceeds going to Light of Day Canada, an organization raising funds to support research for Parkinson’s Disease.

The front of the El Mocambo Tavern pictured on Oct. 30, 2014
(Ari Perlin-Bain/Humber News)