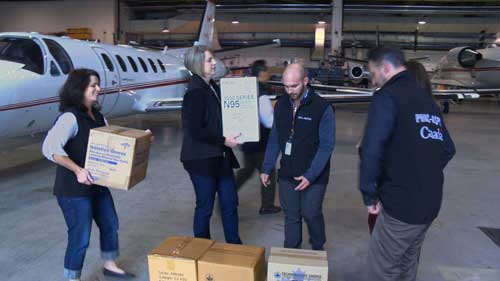 One of five Ebola rapid response teams practiced packing their aircraft in a drill Oct. 17. Photo courtesy of Public Health Agency of Canada.

Canada has been dominating the headlines in what is a day of good news on the Ebola outbreak.

The Public Health Agency of Canada (PHAC) this morning sent its first of three shipments of an experimental Ebola vaccine to the World Health Organization (WHO).

In total, 800 vials of the vaccine have been shipped to the WHO.

The vaccine last week began clinical trials on humans at the Walter Reed Army Institute of Research in Silver Spring, MD. There are high hopes for the inoculant as it has thus far been “very effective in preventing illness” in animal trials and in possible defense in those infected if administered immediately after exposure.

“Canada views this experimental Ebola vaccine as a global resource and in the interest of global public health,” said federal Minister of Health Rona Ambrose in a statement.

PHAC said multiple shipments are being used in defense against accidents, such as a temperature control failure (the vaccine must be kept at -80 degrees Celsius).

“This vaccine, the product of many years of scientific research and innovation, could be an important tool in curbing the outbreak. We will continue to work closely with the WHO to address some of the ethical and logistical issues around using this experimental vaccine in the fight against Ebola,” said Dr. Gregory Taylor, chief public health officer of Canada.

Ebola has killed more than 4,500 people, mainly in the West African nations of Liberia, Guinea and Sierra Leone. Fatality rate estimates range from 50 to 70 per cent.

PHAC also sent one of its five rapid response Ebola teams to Halifax yesterday for a “dry run” with local and provincial health workers.

The teams consist of experts including those in field epidemiology, infection control, bio-safety, communications and logistics as well as laboratory experts.

Four Transport Canada aircraft, split between Ottawa and Winnipeg, are on standby for these teams should Canada get its first Ebola patient.

The Halifax drills “are important to ensuring that our teams are able to respond without hesitation,” federal Health Minister Rona Ambrose said during a press conference.

The teams are to be deployed to support the local medical staff on the front lines, providing support in “containing the spread of the disease,” PHAC said in a news release.

For updates on all of today’s global Ebola news, check out the map below.