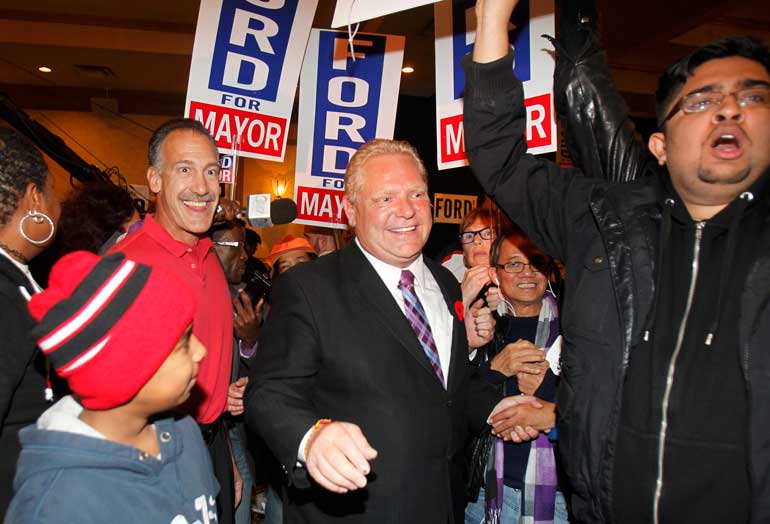 Doug Ford has congratulated John Tory on winning the mayoral race.  He made the statement in his concession speech just a short while ago. At this hour, numbers show John Tory captured 40.26 per cent of the vote, ahead of Ford’s 33.74 per cent and Olivia Chow’s 23.19 per cent.

Doug Ford was a latecomer to the election, replacing his brother, Mayor Rob Ford, who dropped out after he was diagnosed with abdominal cancer.

Mayor Rob Ford had City Hall and Toronto wrapped up in scandal with his admission of smoking crack cocaine, tales of his “drunken stupors,” and his eventual stint in rehab, all while in office. These events made international headlines and had Ford and Toronto making the rounds in comedy TV. Council voted to restrict the mayor’s power in light of these events. Doug Ford stood by his brother throughout the ordeal.

Then Rob ran for and won his brother’s council seat and Doug ran for mayor. Doug, no stranger to controversy, caused a stir when he refused to attend a debate at the Empire Club of Canada at the end of September, saying the he did not support the $800-a-table price. He also prompted a series of debate cancellations by a number of his opponents when he demanded fellow candidate Ari Goldkind be disinvited from a debate or else he would not show up.  A move many saw as more Ford strong-arm tactics.

In his platform, Doug promised to invest $30 million a year for TTC service improvements. He would use the money to complete the Sheppard subway, build a downtown relief line and another subway along Finch Avenue.

He intends to phase out the land transfer tax and keep property taxes below the rate of inflation. He also wants to contract out garbage collection east of Yonge Street to save money.

Ford had no proposals for the environment, cycling, business, childcare or community safety.

Doug missed 53 per cent of council votes in his last year as the city councilor for Ward 2.

The Ford family has a strong base in what’s been called “Ford Nation,” a die-hard supporters primarily from the suburban regions of Toronto.