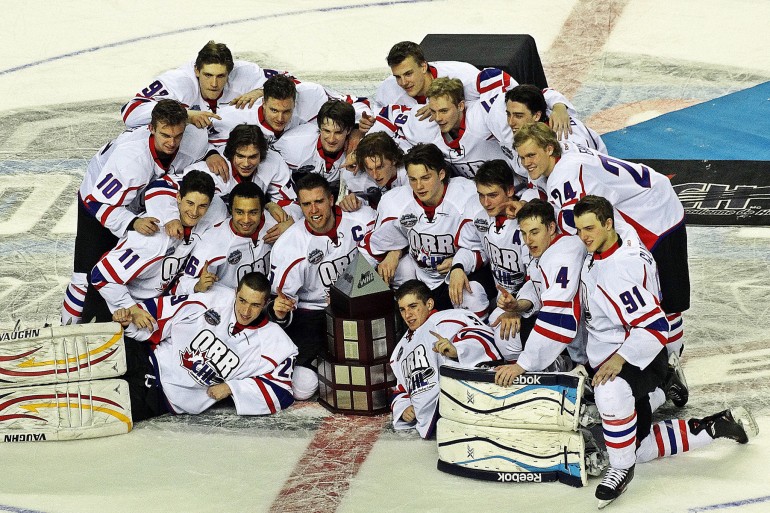 There are 60 teams divided into three regional leagues in the CHL, with players aged 16 to 20. Players are paid based on age and league. (Photo by 5of7)

The 18-year-old son of former Toronto Maple Leaf, Bill Berg is involved in a lawsuit that was filed Friday against the Canadian Hockey League for breaching minimum wage laws by underpaying some 1,300 of their athletes.

The action against the CHL raises questions about players receiving $50 to $120 per week for up to 65 hours of work, while hundreds of millions of dollars are generated in league revenue.

While Berg’s position is supported by many, not everyone feels the same way.

“Honestly I do think it’s fair,” said Sean King, a forward for the Brockville Braves in the Canadian Junior Hockey League. “On top of weekly pay they take care of boarding and put together a tuition fund for after hockey is over.”

“They give you a platform to achieve your dream, I’m not sure I’d call it work,” he added.

The lawsuit is the first of its kind in Canada, but the issue has been debated south of the border for some time.

The U.S.’s National Collegiate Athletic Association has quickly transformed from an athletic regulatory committee into a big business; a business that’s closing in on one billion in profits each year.

According to the Arizona Daily Star, the NCAA made up to $750 million in television rights during the March Madness basketball tournament in 2014 which was distributed to competing universities accordingly. At the same time CBS and Turner Sports, two big name broadcasters brought in over $1 billion in ad revenue.

“They have to devote so much time and effort to their sport, but in a way they are getting paid,” said Mark Reczkiewicz, a

According to QuantHockey, over 50 per cent of players play less than 100 games in the league, with around 5 per cent playing just one. (Photo by 5of7)

former anthropology instructor at the University of Florida. “It’s a good thing to be an athlete.”

U.S. collegiate athletes receive a scholarship that covers tuition, cost of living, and transportation, which is comparable to what the Canadian Hockey League provides for it’s players.

With only 200 players getting drafted each year, the chances of making it to the NHL are slim, and slimmer still that the player makes a career out of it.

According to QuantHockey, over 50 per cent of players play less than 100 games in the league, with around 5 per cent playing just one.

The Canadian Hockey League says it’s gathering information to release a statement in the near future, and have refused to comment on the matter at this time.