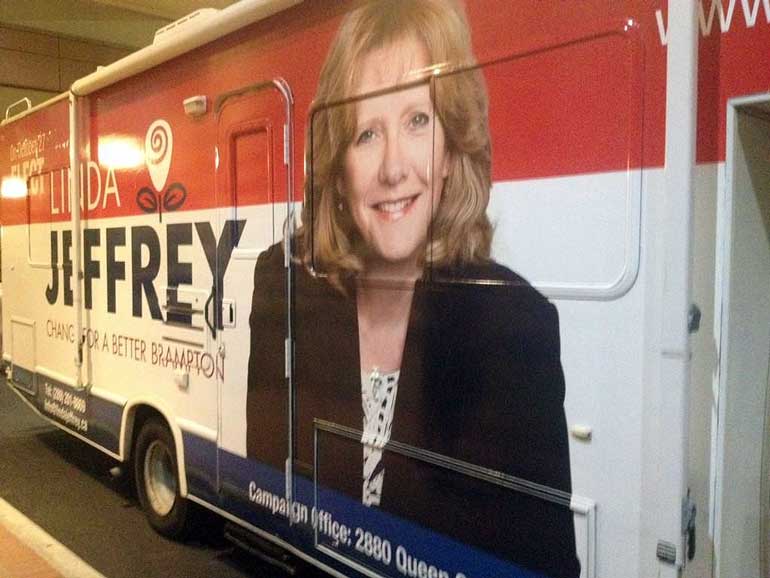 By Christina Romualdo, with files from Ari Perlin-Bain, Tricia Chan and Aabida Dhanji

Brampton has elected a new mayor. Less than an hour after polls closed, former MPP Linda Jeffrey was proclaimed the new leader of Canada’s ninth-largest city with just under half of the popular vote. She beat out incumbent Susan Fennell, who has been mired in controversy throughout the campaign.

Jeffrey pulled into the lead shortly after polls closed. She beat out 13 other mayoral hopefuls, including Fennell and regional and city councillor John Sanderson. Jeffrey received support from 49 per cent of voters, with Sanderson coming in second at 22 per cent and Fennell in third with 13 per cent. Turnout for this election came in at more than 36 per cent of eligible voters.

As the incumbent, former mayor Susan Fennell was expected to continue her streak of winning the mayoral election. Since 2006, Fennell had not garnered less than 50 per cent of the popular vote. Election results prior to 2006 were not available.

Fennell’s popularity dropped in August when a forensic audit conducted by Deloitte Canada found she had grossly misspent taxpayer money. The audit revealed Fennell violated city spending rules 266 times over a period of seven years. In total, Fennell’s office allegedly misspent more than $170,000, leaving taxpayers with the bill for Mandarin lessons, the monthly lease for her Lincoln Navigator and first-class air travel and hotel expenses. On top of this, in 2013, Fennell was the highest-paid mayor in Canada for the second year in a row. Brampton is Canada’s ninth-largest city.

Fennell announced last Friday that an arbitrator’s report had cleared her of most of those charges, but it appears to have been too little too late for voters.