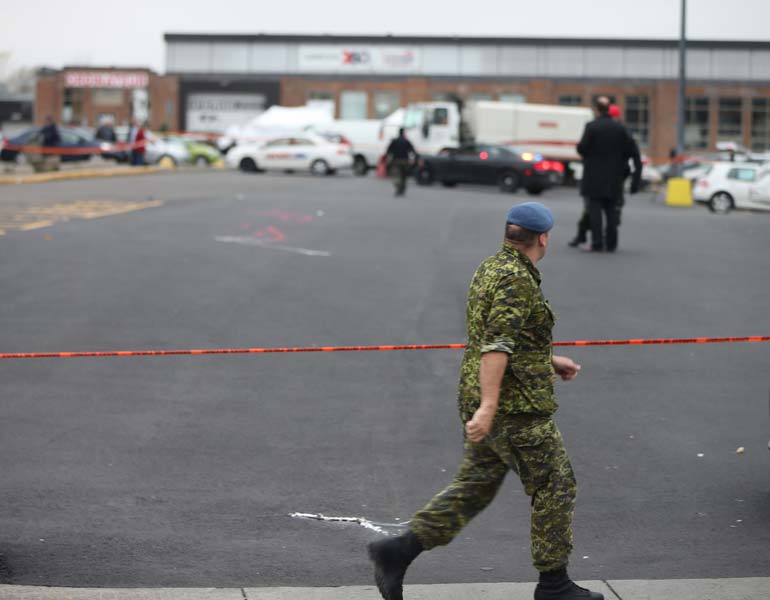 A member of Canada’s armed forces walks past the scene of a hit and run of two soldiers in St. Jean-sur-Richelieu, Quebec Oct. 20, 2014.

A Quebecer who killed a Canadian soldier and injured another “is clearly linked to a terrorist ideology,” Canada’s Public Safety Minister said on Tuesday.

The driver identified as 25-year-old Martin Couture-Rouleau ran his car over the two soldiers near a strip mall in  Saint-Jean-sur-Richelieu, around 40 km southeast of Montreal on Monday, according to a police statement.

Blaney expressed “deep condolences” to the Vincent’s family and to the military.

Police said they don’t fear for the other soldier’s life. His name was not released by authorities.

Police said the attack is suspected to have been “a deliberate act.” Rouleau is said to have waited for at least two hours before driving into the two soldiers.

When asked, Blaney said he wasn’t aware if soldiers were given any instructions to not wear uniforms following the incident.

RCMP said the suspect, shot dead after the hit-and-run, was one of the 90 people being tracked by the authorities. Police are reported to have previously seized his passport.

Deputy Director of Operations at CSIS Jeff Yaworski said on Monday the agency was worried about the militant group ISIS’s social media influence in Canada.

He told legislators CSIS was aware of dozens of Canadians involved in terrorist-related activities with ISIS and other militant groups in the region.

Radicalization is a difficult phenomenon to detect, according to the CSIS website.

Research by CSIS shows that violent extremists come from varied social groups and age levels, and are spread widely across the educational spectrum.

The ongoing investigation was also looking into who the suspect was in contact with on social media, said Quebec Deputy Premier and Security Minister Lise Thériault.

Thériault asked people to come forward and report any relevant comments on social media so potential threats can be investigated, she said.

The radicalization of Canadians towards violent extremism continues to be a significant concern to Canadian national security, according to CSIS.