Union GO station on the move 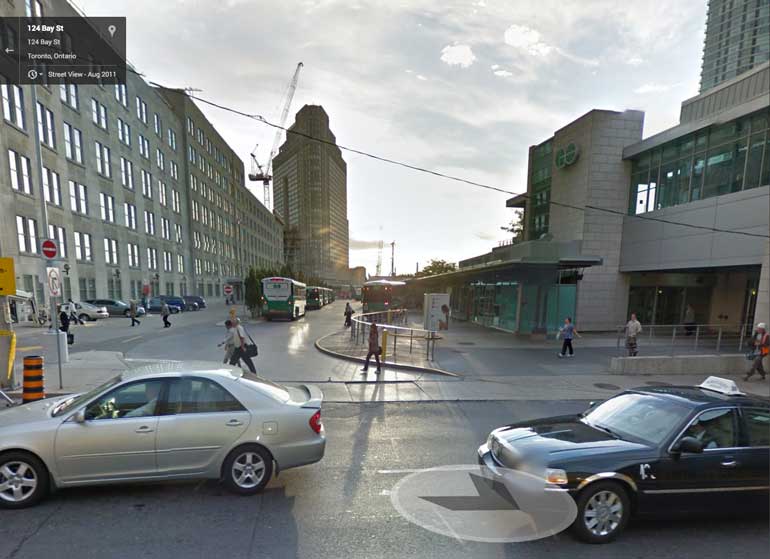 Metrolinx and Ivanhoé Cambridge are set to unfold a major redevelopment plan that will move the GO bus terminal from Union Station.

Metrolinx, the regional transportation agency for the Greater Toronto and Hamilton Area, and real estate company Ivanhoé Cambridge told a press conference today about their plans to develop an integrated transit and office complex in the downtown core.

The proposed plan would have the bus terminal move from its current location at 141 Bay St. approximately 250 metres south to 45 Bay St., a parking lot directly across from the Air Canada Centre.

The development proposal would transform the site into an office tower complex boasting 2.7 million square feet of office space and a larger GO bus terminal at the base of the office towers.

As part of the development project Metrolinx sold its current property at 141 Bay St. to Ivanhoé Cambridge and agreed to long term lease for the space at 45 Bay St.

Vice-Presient of Public Affairs and Media Relations for Ivanhoé Cambridge, Sebastien Théberge, said the company will be investing $2 billion in the project.

“We submitted an application to the city of a plan for the area. Essentially, it’s an office tower complex that’s transit orientated with an elevated Sky Park over the rails that’ll be a public green space,” Théberge said.

A senior planner for the City of Toronto, Leontine Major, said the proposal for a new modern state of the art facility will be a benefit for commuters.

“It’s going to give more flexibility for a highly used bus terminal that, I’m guessing, is running near capacity,” she said.

Major said there will be various experts who will be reviewing the proposal from all angles, taking into account the possible impact on the environment and transportation in the area of the development.

Although the project will be a real estate development first and foremost, the aim is to provide transit solutions for downtown Toronto, Théberge said.

“The reality is that smart and intelligent real estate development nowadays are done to go beyond simple private sector benefits. We take great pride in creating public benefits for most if not all of our real estate projects,” he said.

“From a transportation planning perspective, the idea of creating a permanent and new facility for an integrated bus terminal is something that we see as great opportunity for this area of the city,” Director of Transportation Planning for the City of Toronto Tim Laspa said. “There’s an opportunity to look at expanding pedestrian connections to  the waterfront and expanding the PATH network potentially to this site, and beyond.”

A unique feature of the development project is the planned public “green” space built above the rail tracks which separate 45 and 141 Bay Sts.

Théberge says Sky Park will be an acre of land that will allow commuters to cross from one end of the complex to the other.

“It’ll be a great amenity for the urban experience downtown. It’s really important to not only erect towers, but to offer solutions for people to enjoy their downtown,” he said.

The potential of a larger GO bus terminal that can offer improved service to its customers aligns perfectly with the enhanced connectivity and accessibility attached to the Union Station Hub revitalization project.

“We see this as a project that will help offer solutions downtown, and it was in both parties interest to proceed this way,” Théberge said.

Théberge said construction could begin as early as next spring. The GO bus terminal isn’t set to be on the go until about three years after construction begins.