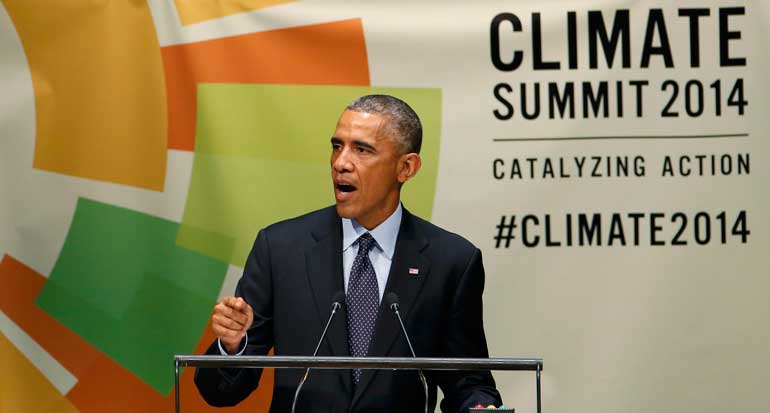 The 69th U.N. General Assembly kicked off this week in New York City and the first issue on the agenda: climate change.

In a highly anticipated speech at the one-day U.N. Climate summit on Tuesday, U.S. President Barack Obama acknowledged the growing threat of a changing climate.

“Today I am here personally as the leader of the world’s largest economy and it’s second largest emitter to say that we have begun to do something about it,” Obama said to the audience of more than 120 world leaders.

The U.S. president announced a number of new initiatives put in place to tackle the reduction of carbon emissions.

These actions “will save consumers more than $10 billion on their energy bills and cut carbon pollution by nearly 300 million metric tons through 2030,” he said.

Just before taking the podium, Obama said he met with Chinese Vice-Premier Zhang Gaoli, reiterating his belief that they have a responsibility to lead “as the two largest economies and emitters of the world.”

“That’s what big nations have to do,” said Obama.

The summit is not part of formal negotiations towards a legally-binding agreement. Instead, the one-day gathering, organized by U.N. Secretary General Ban Ki-moon, aims to build momentum for nations to come into agreement next year at the U.N. Climate Change Conference in Paris.

Previously, the only other leader to have made such a large donation was German Chancellor Angela Merkel. She also will pledge $1 billion USD over the next four years.

“It will not be an exaggeration to say that Filipinos bear a disproportionate amount of the burden when it comes to climate change,” said Philippines President Benigno Aquino.

In the last few years, the Philippines has been plagued with a number of devastating typhoons. Filipino authorities estimated 10,000 dead on one island alone as a result of Typhoon Yolanda in 2013.

Despite not being a major emitter, Aquino committed to developing “environmentally progressive policies,” “transitioning towards less traditional sources of energy,” and “building climate smart infrastructure”.

China is the world’s largest emitter of carbon dioxide, according to World Bank data.

Chinese President Xi Jinping, did not attend the summit personally. He was represented by Vice-Premier Zhang Gaoli who announced China would “provide $6 million USD to support the U.N. Secretary General in advancing South-South cooperation on climate change”.

South-South cooperation is a broad framework collaboration between developing nations.

She announced Canada’s new regulations to lower emissions in vehicles effective Oct. 8. Critics point out these regulations were first proposed by former Environment Minister Peter Kent over a year ago and only brings Canada up to par with U.S. standards.

“What we’ve moved on is the two largest emitters in Canada related to the electricity sector as well as the transportation sector,” said Aglukkaq.

However, according to a report by Environment Canada, oil and gas contributes to 25 per cent of Canada’s greenhouse gas emissions in 2012. Transportation accounts for 24 per cent, and electricity only contributes 12 per cent.

Aglukkaq did not mention any plans to regulate the oil and gas sector.

Following Sunday’s Climate March, thousands of protesters flooded the streets of New York City once again on Monday. This time, they headed to Wall Street.

What started as a non-violent march resulted in about 100 people arrested by police, NYPD Det. James Duffy told Humber News.

Even Frostpaw the Polar Bear was taken away in handcuffs.

Frostpaw is the mascot of the Center for Biological Diversity. In a tweet from the organization’s director, Kieran Suckling, Frostpaw was identified as co-founder, Peter Galvin.

350.org Tar Sands organizer Cameron Fenton participated in Flood Wall Street and told Humber News this protest came as a response to a call to action by the Climate Justice Alliance.

On their website, Flood Wall Street says the goal is to “spark a national conversation about the role of corporate power in climate politics”.

The march shut down Broadway for most of the day, Fenton said.

“I think what’s important is that thousands of people showed up and risked arrest to take the message that we won’t let this crisis go unturned to the doors of corporations, investors, and folks who are bankrolling on climate change,” he said.

Fenton was not present when the arrests occurred. He was among a dozen Canadians who gathered at the Consulate General of Canada in New York City with illuminators to light up a message geared towards Harper’s climate inaction.

Canadians gathered at the Consulate General of Canada in New York City with illuminators to light up a message on Prime Minister Stephen Harper’s climate inaction. Photo courtesy of Zack Embree.

“The next step is to take this energy back to Canada and to take it into things like fossil fuel divestment in Canada and stopping the new TransCanada pipeline project,” Fenton said.