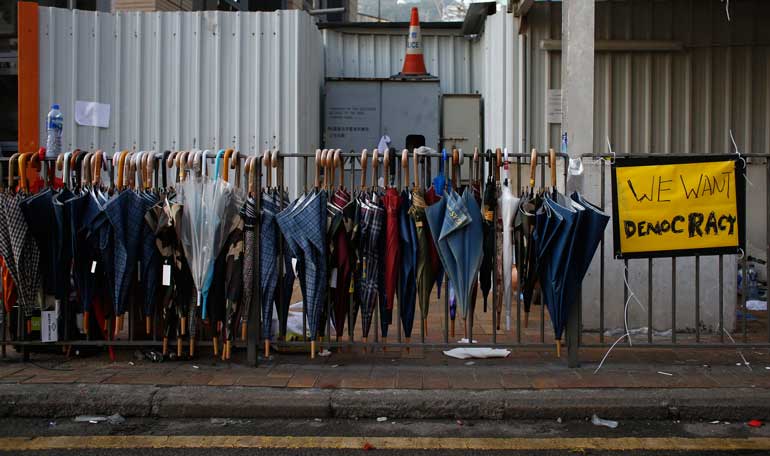 The umbrella has fast become a significant symbol of the “Umbrella Revolution.”

Previously used as shields against pepper spray, protestors also used their umbrellas for protection against the burning sun and more recently, against the thundering rain.

Protestors huddling under umbrellas to seek shelter from the rain on Tuesday night in Hong Kong.

Social media is abuzz over how the umbrella has now become a symbolic representation of the protests as people begin dubbing it the “Umbrella Revolution.”

The leaders of the two protesting groups, Hong Kong Federation of Students (HKFS) and Occupy Central, announced their demands earlier.

First, they want Hong Kong Chief Executive Leung Chun-ying to step down, and second, for the government to meet their demands for full democracy in the 2017 elections.

A statement from the Occupy Central movement says the deadline for a response is set for Oct. 1, China’s National Day, and will “announce new civil disobedience plans same day.”

Special traffic arrangements have been made to facilitate the flag-raising ceremony that will be held at 8 a.m. in WanChai area in central Hong Kong, announced the Hong Kong government.

Despite police backing down after Sunday’s standoff between student protesters and police, she fears the government might take drastic measures, similar to China’s bloody response to the protestors in Tiananmen Square in 1989.

So far, Chinese President Xi Jinping has not interfered in Hong Kong, allowing the situation to be resolved locally.

Instagram was the most recent social media platform blocked in China.

As Hong Kong protestors fear the shut down of cellular connections, they quickly turn to FireChat.

FireChat is a mobile communication application that uses Bluetooth and Wi-Fi connections to send messages between users.

Users can chat anonymously in chat rooms with people nearby within 70 meters.

OpenGarden, the parent company of FireChat, announced in a statement on Monday that 100,000 Hong Kong users have signed up for the application.