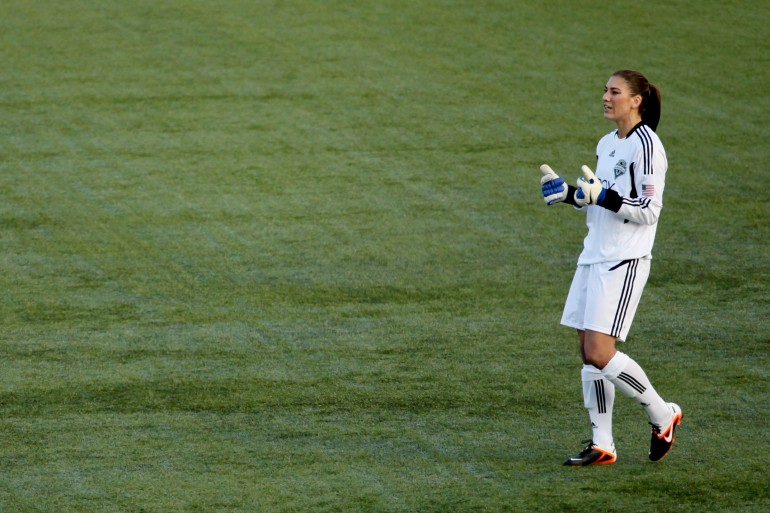 Questions are being raised about whether there’s a double standard in sport when it comes to the treatment of athlete’s accused of domestic assault now that a female Olympian is facing abuse allegations.

Solo, who is one of the biggest and most marketable women in sports, is facing domestic assault charges after a family party that left her sister and 17-year-old nephew with noticeable injuries to their heads and faces.

The team’s support is in marked contrast to the treatment of NFL stars such as Ray Rice and Adrian Peterson. Rice was released from the Baltimore Ravens after a video surfaced of him punching his wife in the face and Peterson was suspended from the Minnesota Vikings for alleged child abuse.

Although the other athletes accused of domestic violence were removed from their respective teams immediately, Solo was still allowed to play Thursday night in Rochester, NY against Mexico, gaining a 4-0 victory as she sported the captain armband.

The star player has pleaded not guilty to the accusations and is awaiting trial in November.

Social media is having a field day, asking why Solo is being able to participate in national sports when players of the NFL are being more heavily scrutinized for their actions.

“Maybe everyone is just too busy calling out the NFL for its ineptitude, but a light needs to shine on Solo’s legal problems, too,” said columnist Juliet Macur of the New York Times.

“It shows that domestic violence isn’t committed only by men,” said Macur.

Toronto social workers knowledgeable about domestic violence are also asking whether a double standard is in play in light of Solo’s race and gender.

“In society there are many double standards and aspects of certain cases that cause them,” said Robert Small, a community worker and educator.

“With regards to the Ray Rice and Hope Solo double standard I believe that race coupled with gender creates the issue,” he said.

“White individuals who commit similar crimes are not given the same notoriety or condemnation. In fact, they are often protected, ignored or their actions are given a subtle dismissal.”

With Solo extending her shutout record as a goalkeeper to 73, the United States hopes to earn a place in the 2015 Woman’s World Cup.

“Unfortunately, double standards are seen on a global level,” said Rose Streete, Founder of the non-profit Mothers Anonymous, in Toronto.

“I know from firsthand experience that no one has the right to wield physical, emotional or economic power over another regardless of sex,” she said.

Solo is a role model to many woman and children who admire her achievements for winning two gold medals for the United States. Fans have taken it to Twitter that they hope this situation is dealt with in a fair way.

“There will always be inequalities’ in domestic violence and that needs to change,” said Stachen Frederick, a worker for the Race to Youth Leadership.

“There have been cases I have seen were men have been treated unfairly in domestic situations and custody battles due to gender,” said the Youth Leader.

“Every sport has their own policy on violence and drug use so it’s hard to say what is right or wrong sometimes.”