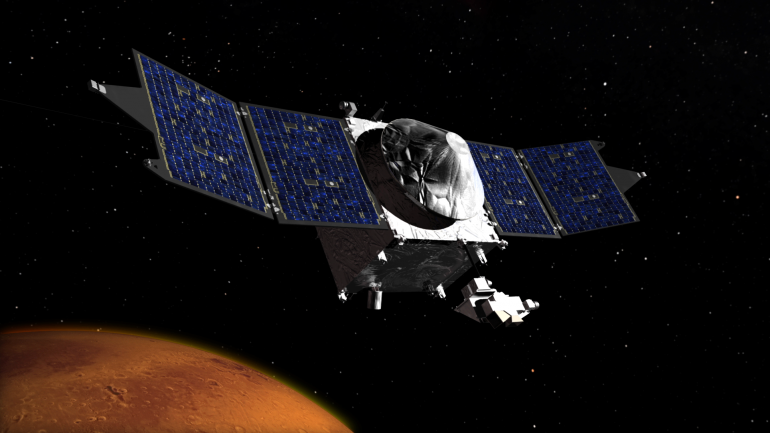 Artist concept of MAVEN mission which will explore the Red Planet’s upper atmosphere and its interactions with the sun and solar wind.
Credit: NASA’s Goddard Space Flight Center

NASA’s latest Mars mission successfully placed a spacecraft into the Red Planet’s orbit on Sunday after a ten-month journey.

According to NASA’s website, the Mars Atmosphere and Volatile EvolutioN (MAVEN) mission will explore Mars’ upper atmosphere, ionosphere and interactions with the sun and solar wind.

A reconnaissance of Mars must be done before humans are sent there, said Bob McDonald, host of CBC’s award-winning science program, Quirks & Quarks.

MAVEN will be looking for methane in the Martian atmosphere, which could indicate the possibility of life in the planet’s past, said McDonald.

Interest in the red planet is not new, said Sabine Stanley, who is the Canada Research Chair in Planetary Physics and the Associate Professor at the University of Toronto. They are particularly interested in how Mars changed from a life-friendly planet to a dry inhospitable one.

The three rovers active on Mars have made some remarkable discoveries, she said. Samples of the martian surface have shown there was a wet climate on Mars at one point.

Mars is the next logical step off planet Earth, said Randy Attwood, Executive Director of the Royal Astronomical Society of Canada.

But the red planet has very little atmosphere, if any.

“You have to bring your own oxygen,” said Attwood.

The strongest theory of why Mars lost its atmosphere may be partly because of its small size.

Atmosphere forms when air spews out of volcanoes and a weak gravity may have allowed it to escape Mars’ atmosphere, said McDonald. The volcanoes on Mars appear to be dormant so there may be no way to replace the leaking atmosphere.

Last year, Curiosity beamed exciting news of evidence of water in the planet’s surface, but now it’s a matter of finding an efficient way to break down the oxygen for breathable air and the hydrogen for fuel.

Despite this, McDonald said Mars is a really hostile place.

“It makes a three-day trip to the Moon look pretty easy compared to a trip to Mars,” said Attwood.

More than 200,000 people signed up for the Mars One mission when the not-for-profit organisers opened registration to select and train the first human crew to settle on Mars.

India launched its own Mars orbiter shortly after MAVEN and is scheduled to reach the red planet’s orbit on Wednesday.

“If it is successful with its Mars orbiter… it will essentially put India in that ball game with the other players,” he said.

McDonald cited the recent Franklin expedition, where people got stuck in a hostile Arctic environment for two years. In comparison, being stuck on Mars would be an entirely more difficult situation.

And to live there is a completely different thing, said McDonald.

He adds that if we can find evidence of life on Mars, even just microscopic fossils of ancient life, it will prove that we are not alone in the Universe.

“If they were going to send people on a one-way mission to Mars, they should send seniors like me,” said McDonald.

When asked if he would take up a trip to Mars, McDonald said, “I’d consider it.”