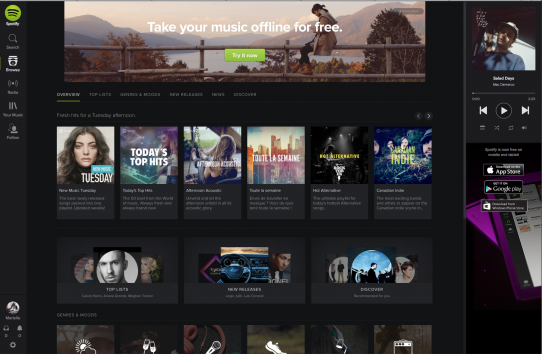 Users will be able to stream songs and albums via their tablet, iPhone, android, or even on the web. And similar to  it’s competitors 8tracks and Songza, playlists are sorted by moods, genres, and even activities such as sleeping or working out.

Although the main attraction is the free streaming, there is an option to pay $10 a month for the premium account to avoid ads.

Andres Sehr, marketing director at Spotify, says the move into the Canadian scene is an important one but acknowledged it has taken the music streaming service a while to enter.

“Canada has been a great music market, and they’re really an important one for us so that’s always been on our road map,” said Sehr. “Launching in a new country you need to do deals with all the labels and the publishers in every market, and that does take some time.”

Spotify offers a way to find Canadian musicians and features bands from Arcade Fire to Bahamas.

As for how Spotify supports musicians, artist compensation comes into question, especially when music streaming services are a cheaper alternative to buying records or CDs.

“We pay out 70 per cent of all revenues to the rights holders,” said Sehr. “So obviously it all depends on how much it’s streamed and which market you’re in.”

Renny Wilson is a musician from Edmonton whose single “By And By” is featured in the Canadian Indie playlist. His work was also featured in American Spotify prior to the website’s Canadian launch.

While Wilson makes a considerable amount of money from American radio play, he said he doesn’t know how much he’s made from American Spotify.

As for its Canadian launch, Wilson said he sees the potential to earn money, but doesn’t expect much.

Despite the lack of artist compensation, Spotify can be a useful marketing and promotional tool for musicians said Sehr.

“We have 40 million users, so if you’re an artist and you put your music on Spotify you have access to a massive audience,” he said.