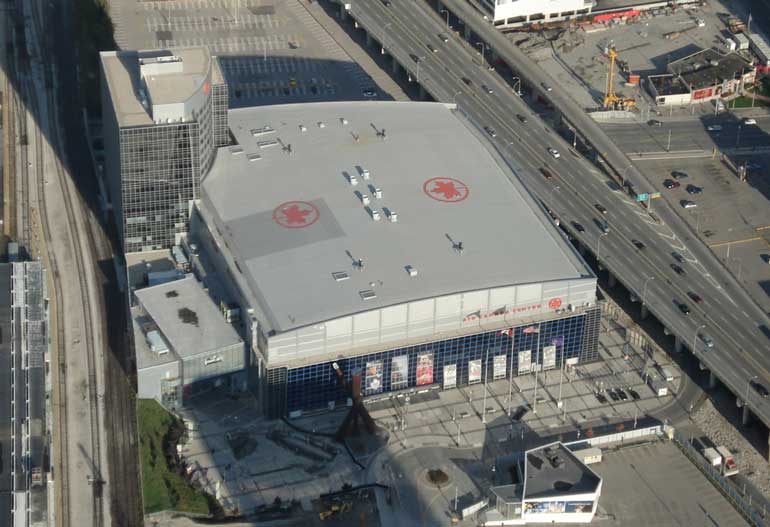 The Air Canada Centre, home of the Toronto Maples Leafs and Raptors.

Ford Canada and MLSE are proud to announce that Maple Leaf Square will not be renamed “Ford Square” after all.

As reported in Humbernews.ca last week, the area was initially going to be called Ford Square, but the public outcry pushed Ford and MLSE to name the area as the “Ford Fan Zone at Maple Leaf Square.”

The partnership between the two companies aims at rewarding fans by giving out 200 free tickets to the public before every Leafs game, according to a newswire press release.

When the “Ford Square” name was initially leaked last week there was resentment on Twitter by Torontonians because residents thought the name was in honour of Toronto Mayor Rob Ford.

People now know the name reflects Ford Motor Company, not the Mayor, and the partnership with MLSE offers a potential reward in free tickets to die-hard Leafs fans. The tickets are for Leafs games only.

Perks of the new agreement consist of fans having the opportunity to win free tickets by engaging with the “Ford Fanatic” on Twitter, @thefordFANatic, and on Facebook. The Ford Fanatic social media page will be awarding tickets to fans that show the most passion online by being active on social media and succeeding in in-person challenges.

“The root of what we’re doing is trying to bring fans closer to the game,” said Michelle Lee-Gracey, corporate communications manager at Ford of Canada.

“We will be giving away more than 9,000 free tickets within the next year and 45,000 over the next 5 years,” she said. “We’re really thrilled to be giving back to the city and hope to create excitement for the Leaf and Raptor fans.”

Ford of Canada is currently a sponsor of the Leafs, Raptors, and the Air Canada Centre, which both teams play in.

“Maple Leafs tickets are hard to get during the regular season and Ford has bought tickets and is giving them to the fans and supporters every game for the next five years,” he said.

The Toronto Maple Leafs kick-off their season on Oct. 8, 2014, where frenzy of the Ford Fan Zone will be in full effect.