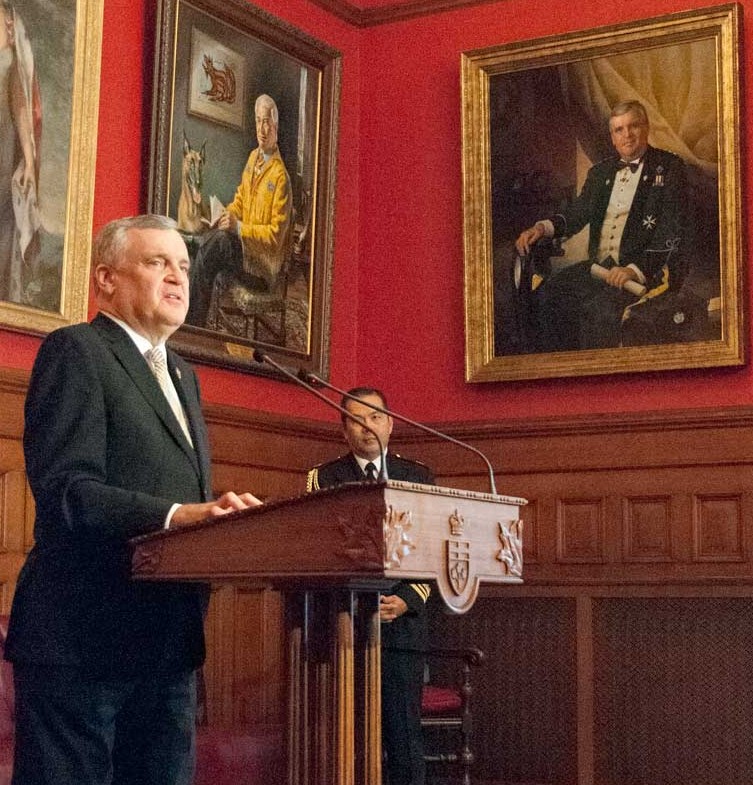 He began his career as a weather reporter for CityTV and went on to cover science and technology stories. Onley also hosted a weekly series show known as Home Page for CablePulse 24.

He worked tremendously throughout his career to change the way people view individuals with disabilities in the work force.

Speaking at Queen’s Park today, he reminded Canadians that a full economic recovery cannot occur until we start maximizing the hundreds and thousands of people who are on government assistance. Many of these people are trained and want to work, but cannot contribute to our economy until they are hired and become tax payers.

Onley said progress on accessibility is still too slow despite raising awareness during his seven years. “It can’t be fast enough, especially if you are one of the people who are unemployed.”

The Lieutenant Governor was part of the board of directors for the Canadian Foundation For Physically Disabled Persons.  The CFPDP awarded him the King Clancy award in recognition of his personal achievements and contributions in support of Canadians who live with disabilities.

“He was able to break the barriers that stand in the way,” Vim Kochhar, the founding chair for the Canadian Foundation For Physically Disabled Persons, told Humber News. “People on the legislature understood he couldn’t get on the podium, unless some arrangement was made for lifting devices. So accessibility became very pronounced when he became Lieutenant Governor.”

Onley’s record in office will also leave behind a legacy of improving relationships with Aboriginal peoples in Ontario. Throughout his time in office Onley was actively committed to expanding literacy among Aboriginal youth.

He said the main focus of his team these past few years has been on the process of building relationships. “To Indigenous people, relationships are the starting point,” said Onley.

The Lieutenant Governor launched book drives to raise money for books that were sent to First Nations Children in Northern Ontario. He ran summer reading camps and established a pilot computer program in Kingfisher Lake and Polar Lake First Nations.

Upon closing this chapter of his life, Onley made it clear he plans to stay on the fore front of accessibility issues.

He will also be teaching political science part time at the University of Toronto.