iPhone 6 and 6 Plus released this morning 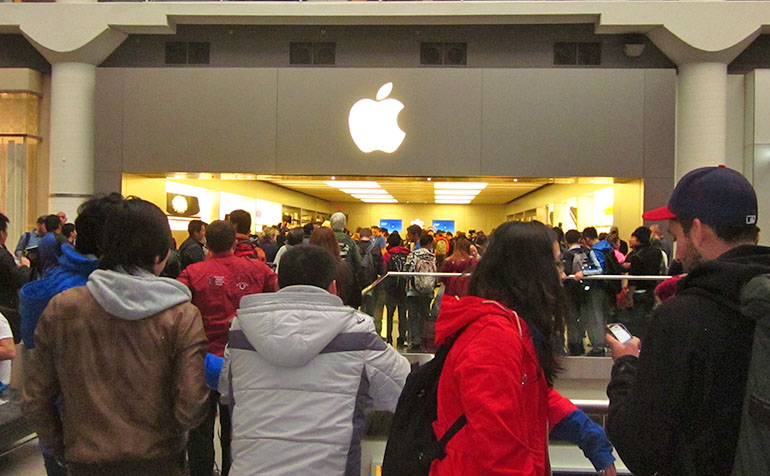 The Apple Store in the Eaton Centre at the iPhone 6 and iPhone 6 Plus release. PHOTO BY Kendra Hamilton

Gadget fans finally got their hands on the new iPhone 6 and iPhone 6 Plus this morning after waiting in line for days.

Ishan Vadera, 23, said he arrived at the Apple store in the Toronto Eaton Centre three days early so he could be one of the first in line.

Rachel Healey (left) and Ishan Vadera (right), were first in line at the Toronto Eaton Centre to get the new iPhone 6 Plus. PHOTO BY Kendra Hamilton

“I have always been an Apple fan boy and I have never been in a line for the iPhone or the iPad but the whole experience has been amazing,” said Vadera. “I’ve been up for 53 hours…I pretty much stink.”

This is one of the biggest turns outs for a release that the Apple Store at the Eaton Centre has seen, said an Apple representative.

Vadera was hired through AskForTask.com by Rachel Healey, 23, to stand in line for her.

“We came together just over a week ago and he made a bid on the task and I accepted it,” said Healey.

“Originally we were thinking (he’d start waiting in line) Monday and then we came into the mall and talked to security guards and we figured Tuesday was our best bet,” she said.

Healey said she is most looking forward to using the bigger screen on her new iPhone 6 Plus.

The new phone is larger and thinner than older versions. The screen on is 4.7 inches on the iPhone 6 and the 5.5 inches on the 6 Plus. Both models are being advertised as having improved LTE and Wi-Fi speeds, better camera autofocus, and 128GB of storage. The two new iPhone models were released this morning in Apple stores across the Canada.

“They’ve upgraded the technology so…hopefully it will be everything Apple has made it out to be,” said Frank Crankon, the man who was first in line to get the new piece of Apple technology. “I understand it’s got a faster processing server.”

People lined up for days inside the Eaton Centre to get the new iPhone 6. PHOTO BY Andrew Chapados with AskForTask.com

It’s about more than just about getting their hands on the new hardware and software however, said Amelia Bai, 22 and Doris Li, 22, who waited in line at the Eaton Centre for 15 hours.

“It’s also fun waiting with all your friends,” said Bai.

The two girls brought floor mats, sleeping bags, card games, and a tent with them to make waiting an enjoyable experience, said Li.

“I’m gonna be here next year and the year after because this is like festival for us, it’s just amazing,” said Vadera.

“I was one of the first guys in Toronto, in Canada, to see and touch the iPhone,” he said. “Being an Apple fan that is amazing.”