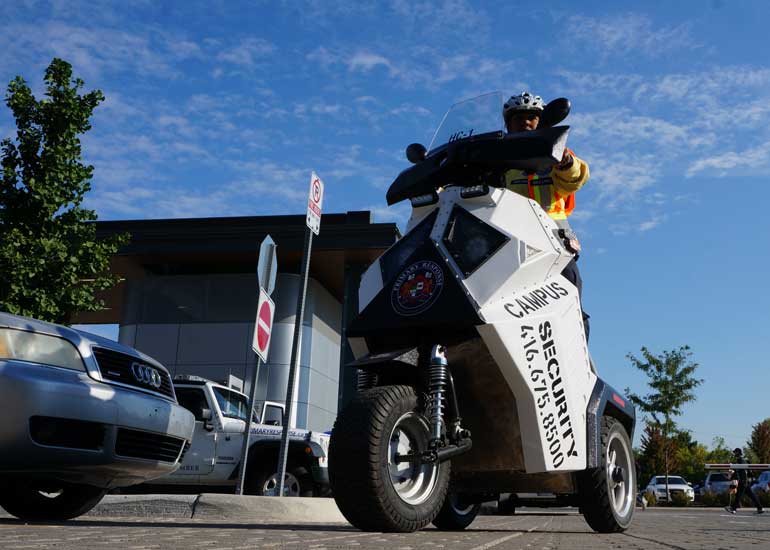 The North Campus has two of the new Sentinel PMVs while the Lakeshore Campus has one. (Vick Karunakaran)

There is a new breed of rides patrolling the Humber campuses. They are fast, stealthy and they are called Sentinels.

The Sentinel is a fully electric, single-rider Police Mobility Vehicle and gets easily mistaken for a Segway.

Seeing the Sentinels at a Montreal trade show recently got him thinking about using them to enhance campus security, Kilfoyle said.

The Toronto based Primary Response Services, the contract security provider agreed to buy and provide the devices as part of their contract, said Kilfoyle. “So it didn’t actually cost Humber College any direct investment,” he said.

They may have felt a need to step up on security for them to get the new rides, said Andrew. “I guess they are working on it by getting the segways,” she said.

It’s probably more accessible to get around than a jeep, said Humber General Arts and Science student, Adam Lukomski.

The Sentinels are used mostly by law enforcement but he’s not aware of many colleges in Canada that have them, Kilfoyle said.

Humber Hospitality student Ritam Banerjee noticed one Sentinel going by and said he knew it was electric because he didn’t hear any sound.

Green vehicles “are good for the environment and good for us,” said Banerjee. “We should encourage the use of these types of vehicles,” he said.

“They also provide an elevated platform for the security officer to stand on,” said Kilfoyle. This gives them a better field of view above everyone else, he said.

This zero-emission three-wheeler is designed to handle multi-terrain, according to the Nevada-based Xtreme Green Products (XGP), Inc that makes these products.

The Sentinel PMV is designed to replace bicycle and foot patrol with a reliable, state-of-the-art, and efficient security vehicle, according to XGP.

Kilfoyle said he does not anticipate operating the Sentinels during winter. “It will be much too cold to have somebody on that,” he said laughing.

“They are pretty new, so I guess time will tell,” said Lukomski.