Harper to be absent at U.N. Climate Summit 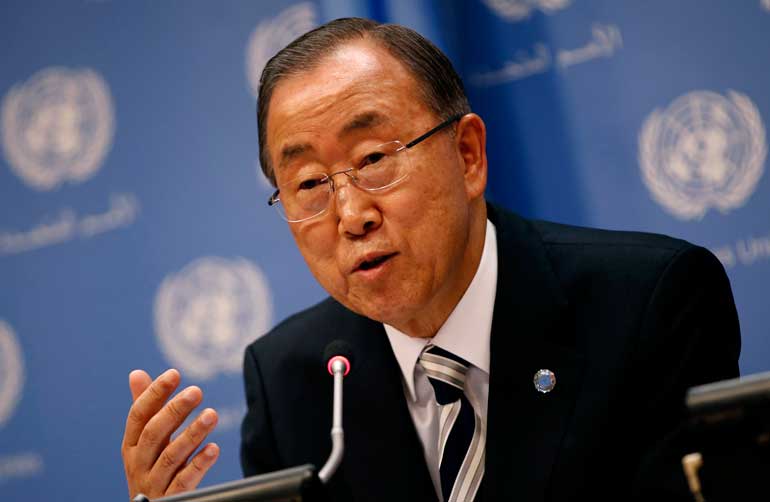 More than 120 world leaders will gather together on Sept. 23 for a one-day U.N. Climate Summit in New York, but Canada’s Prime Minister Stephen Harper won’t be one of them.

U.N. Secretary General Ban Ki-moon asked these leaders to bring together bold action plans in reducing greenhouse emissions. The goal of this summit is to propel action towards achieving an international climate agreement at the UN Climate Change Conference in Paris (COP21) next year.

A statement released by the Prime Minister’s Office said Canada will be represented by the Minister of Environment, Leona Aglukkaq.

Harper is to arrive in New York two days after the completion of the summit to participate in the Every Woman, Every Child event hosted by the secretary general.

“I imagine it has something to do with killing Kyoto, and the fact that there’s not a snowball’s chance that he’ll hit his Copenhagen 2020 targets,” said McKay.

Canada is the ninth greatest carbon dioxide emitter in the world, according to data from the World Bank.

“Our emissions are growing and they’re not coming down,” said Keith Brooks, the Clean Economy program director of Environmental Defence.

Canada is obligated to reduce emissions by 20 per cent, a commitment made at the Copenhagen Summit in 2009, said Brooks.

“The largest issue has to do with the planned expansion of the tar sands which would see emissions more than double in the next 20 years,” Brooks said.

Tar sand expansion not only increases greenhouse gas emissions, but the extraction activities have impacted the indigenous communities in the surrounding areas, said Crystal Lameman, a member of the Beaver Lake Cree Nation in Alberta.

“Tar sand extraction is directly impacting our inherent birth right as the original people of what is called Canada […] We’re at a time now where we’re pulling deformed fish out of the water, moose with puss bubbles under their skin, deer with green meat, and contaminated water. We’re suffering from respiratory illnesses and dying of cancer. With tar sands being the largest greenhouse gas emitter, I think that’s a clear indication of how it’s affecting those of us living in the front lines of the impacted community.”

Despite whatever message Harper’s absence might send about his government’s stance on climate issues, Canadian citizens took to the streets by the thousands to have their voices heard.

About 300,000 people marched across New York City streets on Sept. 21 in the Climate March. The series of marches held in various cities worldwide is what organizers say is the largest climate demonstration in history.

350.org facilitated 12 buses to shuttle Canadian participants across the border, said the Canadian Tar Sands Organizer with 350.org, Cameron Fenton who was among the Canadian protestors still in New York.

“We saw thousands of people out on the streets in Canada and it shows that this issue does have resonance with people in Canada,” Fenton told Humber News. “Not only are people concerned about climate change, but they’re also frustrated and angry that we have a government who is so willfully ignorant of the crisis.”

Canada’s literary sweetheart, Margaret Atwood, tweeted the prime minister daring him to appear at the summit.

PM Harper, time to face up to the truth. We dare you to go to New York for the #climatesummit: http://t.co/gHPV6mHZqO

The Rockefeller family, who is famously known for building its fortune on oil, is joining the divestment movement away from fossil fuels.

The Rockefeller charity organization, Rockefeller Brothers Fund (RBF), is one of 181 institutions and local governments, along with hundreds of individuals, who have pledged to join the movement, according to Arabella Advisors. A total of $50 billion in assets will be divested from fossil fuel.

In a statement released on their website, the RBF said:

“…Given the RBF’s deep commitment to combating climate change, the Fund is now committing to a two-step process to address its desire to divest from investments in fossil fuels. Our immediate focus will be on coal and tar sands, two of the most intensive sources of carbon emissions. We are working to eliminate the Fund’s exposure to these energy sources as quickly as possible…”

This will have a huge impact on the divestment movement, said Fenton.

“We have one of the largest charitable foundations in the world saying they’re going to walk away from fossil fuels,” he said. “This is a strong indicator to people, institutions, universities, and other foundations that not only is divestment smart and moral for the climate, but it’s also a good financial choice.”