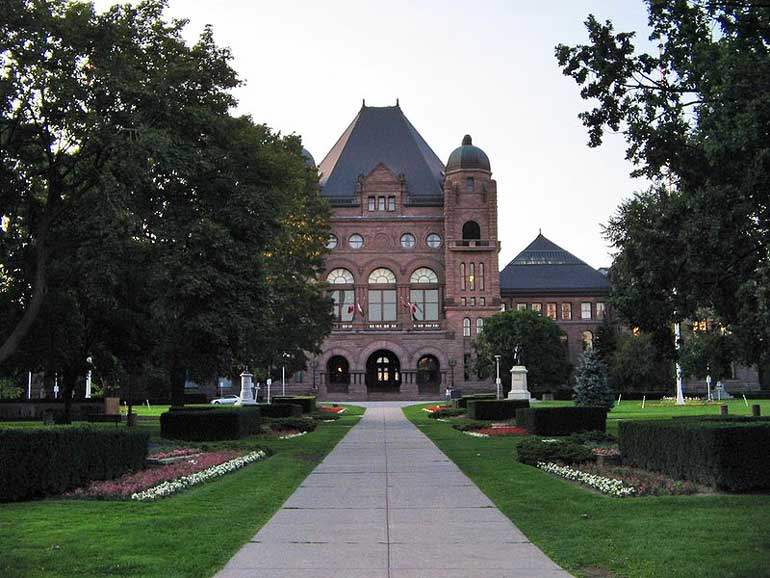 Ontario’s 29th Lieutenant Governor has been sworn in at Queen’s Park.

Elizabeth Dowdeswell arrived at the legislative chamber in the traditional horse and carriage procession down University Avenue.

Prime Minister Stephen Harper announced the appointment of Dowdeswell on June 26. In 2012 she was named an Officer of the Order of Canada as well as receiving the Queen Elizabeth II Diamond Jubilee Medal.

Dowdeswell’s CV demonstrates a multitude of academic credentials, career achievements and accolades. She belongs to numerous organizations which champion the cause of sustainable development and growth, along with organizations that promote the need for increased accessibility and quality of education for the less fortunate.

Some of the organizations Dowdeswell is involved with include community service and the promotion of a healthy environment. She’s also worked with the Higher Education Quality Council of Ontario, the Nuclear Waste Management Organization and Nature Canada’s Women for Nature initiative.

“She created a culture here where we ‘walk the talk’ to ensure our work really is influenced by the people that are potentially most affected,” Communications Manager of the Nuclear Waste Management Organization (NWMO) Mike Krizanc said.

“Liz encouraged dialogue, she encouraged citizens to participate in important public policy decisions that affect them,” he said.

Dowdeswell was the first President and CEO of NWMO when the organization was established in 2002 and remained in the position until 2007.

“She had a great deal to do with the development of Canada’s plan for managing used nuclear fuel over the long term,” said Krizanc. “As you can imagine this is a very difficult subject, so Liz brought some very special talents to the Canadian dialogue about this subject.”

He said he has no reservations about Dowdeswell’s ability to effectively carry out the responsibilities of Lieutenant Governor because she believes that we learn best by learning from others.

Dowdeswell was the Chair of the board of directors of the Higher Education Quality Council of Ontario from 2012 up until her appointment as Lieutenant Governor.

“If there’s anyone who deserves a position like this and has earned it, it would be Liz Dowdeswell,” said Executive Director of Data and Statistics at HEQCO Martin Hicks.

Hicks worked alongside Dowdeswell during her time as Chair and recalls how proficient she was at actively listening to the opinions of everyone and finding a middle ground.

“The thing that makes us selfishly sad to lose her as our Chair are the same leadership qualities that make us think she’s going to do a really good job as Lieutenant Governor of Ontario,” he said.

Hicks said Dowdeswell has the ability to strike a balance between leading with an invisible hand that allows everyone to enjoy a level of autonomy needed to get their jobs done.

He said she was efficient in ensuring the board was active, informed and relevant by treading the “magic line between providing board guidance in the pursuit of a clearly defined strategic vision and mission and at the same time giving management and staff the ability to deliver on that vision.”

“It’s a hard balance to strike and she understands how to strike it. I think it’s going to be so good for the province,” Hicks said.

“It’s really exciting to have a Vice-Regal in the province who knows and understands this and has a unwavering passion for the promotion of education,” Hicks said.

“If there’s anything we need in a democracy is the ability to find consensus  and to get along. That’s a strength to be admired in her, and I’m sure we’ll all see some of that in the coming years,” Krizanc said.