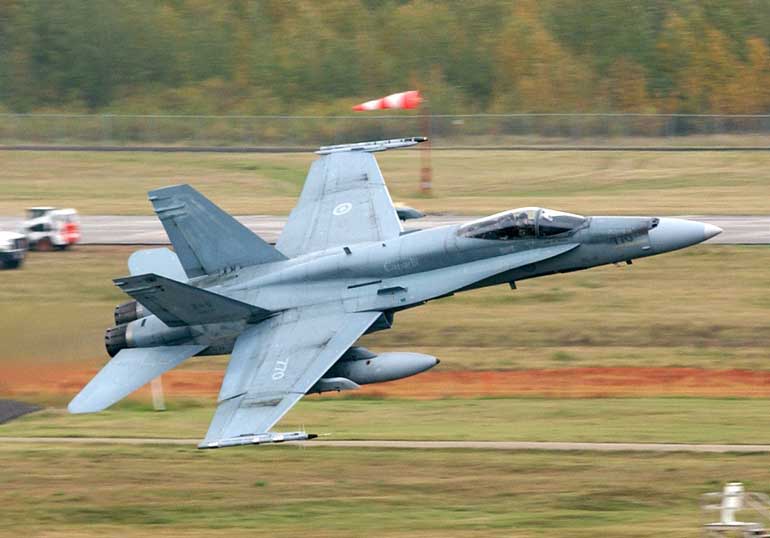 It seems almost assured that Canadian jets will soon be flying combat missions over Iraq as a part of an international effort to “degrade and ultimately destroy” the militant group ISIS following statements by Prime Minister Stephen Harper on Sept. 24.

“We need to push them (ISIS) to the fringes and make their basic organization and logistical existence very difficult on an ongoing basis,” Harper said. “A lot of that can be done from the air.”

There is an expectation cabinet will soon convene to discuss possible air strikes by the aging CF-18 fleet.

Concerns have been raised of the stress possible combat will have on the aircraft. Papers presented to Parliament in 2012 say an hour of combat flight time inflicts damage equivalent to three hours of domestic flight.

Reports today say the government is prepared to fund the CF-18s’ maintenance and upgrades for another 10 years. Sources have estimated the life-extension could cost tens of millions of dollars and potentially up to $100 million. What impact the potential air mission in Iraq would have on these costs is unknown.

Liberal national defence critic Joyce Murray said these plans were just another example of what she said is the Conservative government’s mishandling of the fighter-replacement plan.

“I see this decision to spend up to $100 million, bearing in mind that … it may be double that or more, to keep these jets flying is a consequence of their mismanagement of the whole program for the replacement of the CF-18s,” Murray said.

When an air mission may happen is still to be determined. Harper promised whether it happens at all is reliant upon the approval of the House of Commons.

Foreign Affairs Minister John Baird reinforced that vow in Question Period on Monday. In response to an NDP question he said “if there were to be a combat mission, we would seek to bring it before Parliament as a matter of confidence.”

If a vote of confidence were to fail, an unlikely event given the Conservative majority, it would bring down the government and trigger an election.

The questions surrounding Canada’s involvement in the fight against ISIS are swirling beyond potential air combat. The mission deploying 69 special forces personnel to advise the Iraqi and Kurdish forces was given a 30-day deadline for reassessment. That deadline is set to pass Oct. 5.

During Question Period today, Harper dodged pointed questions from NDP leader Tom Mulcair about the specific role Canadian forces have taken and will take in Iraq.