A historical look at mayoral polls 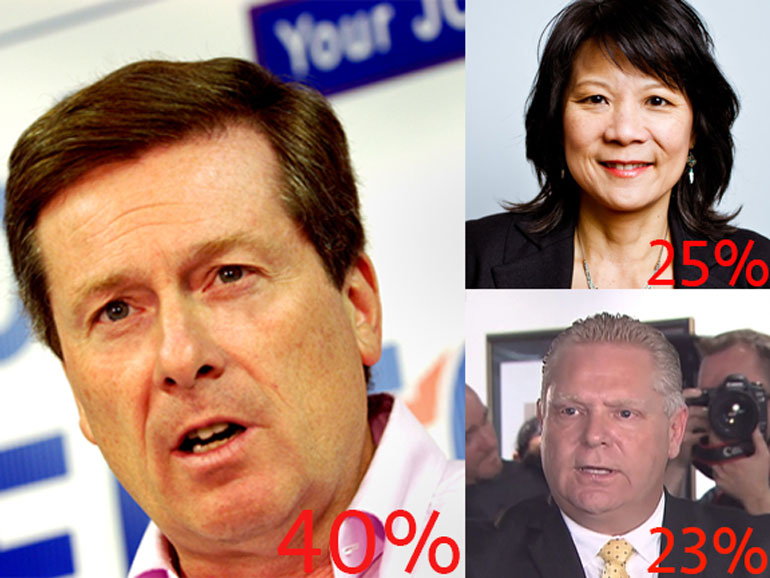 With the municipal election just weeks away, Nanos Research and Mainstreet Technologies have released their latest poll results.

Despite both polls being conducted during the same time period, they show significant differences in levels of support for John Tory, Olivia Chow and Doug Ford.

In the latest tallies, Tory continues to dominate over his competition. However, there is a nine per cent difference between the two polls. The two show that Doug Ford and Olivia Chow are neck and neck, fighting for second place.

In past years the closer the poll to election day, the more accurate it has been. During the last three mayoral races, the polls had only slightly differed from the final result. 17 per cent of people who consider themselves to be “likely voters” are undecided, and are believed to have an impact on voting day, according to Nanos earlier this month.

Theses are the latest results for this year’s candidates:

In 2003, David Miller’s closest competition was none other than John Tory. Compared to Miller, Tory who has not run for mayor since, is in good shape this year, according to Nanos Research.

In 2006, David Miller won his second term as mayor with a majority win of 57, beating his closest competitor by over 20 per cent. In the Decima Oct. 28 poll (shown below), there was a 27 per cent difference from the final result, mainly due to the number of undecided voters at the time.

The results of Nanos Research’s 2010 poll were close to accurate because it was conducted two weeks before the vote. Rob Ford made a slight increase while both George Smitherman and Joe Pantalone decreased.

With voting booths opening Oct. 27, what official results will be is still a mystery.