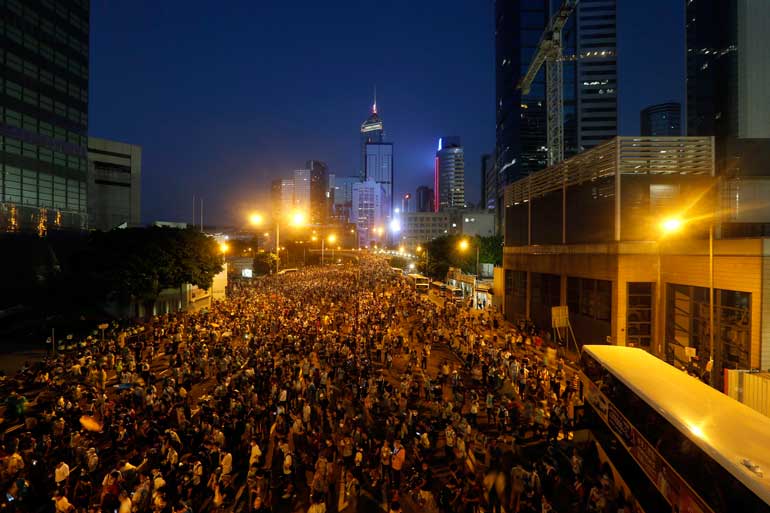 Mass protest in the streets of Central, Hong Kong.

Tens of thousands of residents stormed the streets of Central, Hong Kong to protest against China’s plans for the 2017 Hong Kong Chief Executive election.

Much of Hong Kong’s financial district is paralyzed as protestors took to the streets and blocked through-traffic.

A week of peaceful student protesting outside of government headquarters resulted in students breaking into a sealed off area that was previously freely accessible to the public.

The Friday break-in led to forceful action from police who employed tear gas, pepper spray, and batons against the unarmed students.

Nearly 100 people were arrested, and dozens were injured.

“This is not just a protest,” said Andrea Chun, a lawyer and host of Cantonese radio show, Newsbeat. “They’re using tear gas on their own people, it’s unprecedented.”

“The only other time they used tear gas was during the 2005 WTO conference, when Korean farmers attacked the police,” said Andrew Leung of the Ontario United Front of Hong Kong Students (OUFHKS). “That isn’t even the same level of demonstration they’re facing today.”

“Students were protesting without harming anyone, so it was unreasonable for them to use that level of force,” Leung said.

The peaceful demonstrations quickly escalated into mass civil disobedience after the violent retaliation from police.

Occupy Central, a pro-democracy campaign, was planned to launch on Oct. 1 but organizers suddenly announced the immediate launch on Sept. 28 to support the student protestors and to take advantage of the momentum created.

Thousands more citizens then surged the streets to protest.

While the student protest and Occupy Central began separately, they echo the same concerns over China’s increasing assertion of authority in, what is supposed to be, autonomous Hong Kong.

China bends its promise of “one country, two systems”

Hong Kong was finally returned to China in 1997 after years of British rule with that, came a promise of “one country, two systems.”

The idea was to allow Hong Kong to remain autonomous for another 50 years after reunification.

Basic Law is the constitution of Hong Kong that was negotiated between the British and the Chinese prior to the handover, Chun told Humber News.

“Under the Basic Law, is Article 45 which states that Hong Kong will be able to directly vote for their chief executive (the highest ranking position in Hong Kong government),” said Chun.

In a highly anticipated announcement on Aug. 31, China’s legislature declared its plans for the 2017 Hong Kong Chief Executive Elections.

Citizens will vote for the chief executive, the catch however, is that an election committee will choose two to three candidates for the position, and that candidates must be “patriotic”.

“This is a clear term meaning pro-China,” explained Chun.

The announcement sparked public outcry with citizens claiming it as a false democracy and accusing the Chinese government of revoking its promise of autonomy.

“Basic Law does allow Beijing (Chinese government) to interpret the law as they see fit,” said Chun. “That is where the problem is.”

“Beijing is not going to budge and the Hong Kong government has no power to negotiate, so you’re in a catch-22,” she said.

“A lot of young folks feel there is no hope, and no future,” said Chun.

Since these protests started, the Chinese government has clamped down on access to social media in mainland China.

The main social media platform in China, Weibo, saw a five-fold increase of posts that could not be accessed, according to Weiboscope, a censorship monitoring project at the University of Hong Kong’s Journalism and Media Studies Centre.

According to the data collected by Weiboscope, an average of 32 messages were deleted for every 10,000 posts in the seven days leading up to Sept. 26.

When Occupy Central officially launched on Sept. 28, this number increased to about 152 messages deleted for every 10,000 posts.

Instagram was blocked for the first time in China, preventing Chinese residents from viewing any photos posted on the social media platform.

Students in Toronto are showing their support.

OUFHKS is an organization of Hong Kong students from educational institutions across Ontario who are concerted about the current events in Hong Kong, said Leung.

“On Oct. 1, we’re going to set up a demonstration … the main purpose is to condemn the recent violence of the Hong Kong police against students and to express our concern of the political reform in Hong Kong,” said Leung.

The significance of Oct. 1 is that it’s China’s National Day marking the birth of the People Republic of China.

“It’s really saddening,” said Jemun Li, a Hong Kong native who graduated from the University of Toronto. “I’ve never seen my hometown like this before.”

OUFHKS will begin their protest at 2pm on Oct. 1 at the Hong Kong Economic and Trade Office, the government representative of Hong Kong in Canada.