Toronto Comic Arts Festival a celebration of the craft 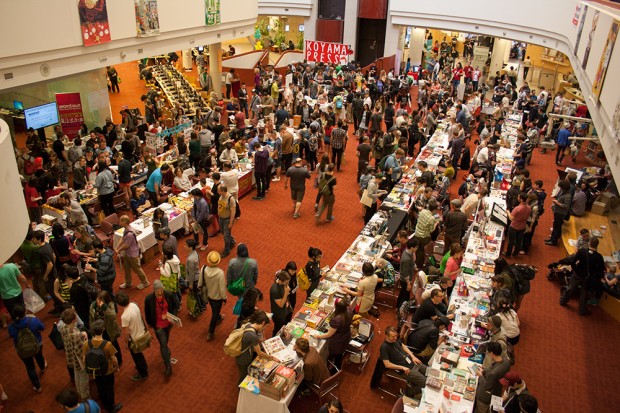 Comic artists from around the world gathered at the Toronto Reference Library this weekend for the annual Toronto Comic Arts Festival. The two-day event featured interviews, readings, panels and workshops as well as an all-day vendor fair from comic artists and writers. And kicking off the event on Saturday was a hosted conversation between revered Canadian comic artists Lynn Johnston and Kate Beaton.

It was a first-time appearance for Johnston, who in 1979 created the popular and award-winning syndicated comic strip For Better or For Worse. Beaton, creator of the online web comic and best-selling print series Hark! A Vagrant! has had her work appear in publications including The New Yorker and Harper’s Magazine.

At the center of the festival was a vendor fair, featuring hundreds of artists and writers.

Abby Howard is the creator of the popular web comic Junior Scientist Power Hour. Her recent success is still fairly new to her, and she describes herself two years ago only as ‘an unknown.’ At TCAF, however, she found herself as a popular name among attendees and exhibitors alike.

“I got to meet a lot of other creators who know who I am,” she said. “But I didn’t know who they were, which is awesome. I felt really special. This is what I’ve always wanted. I feel like it’s right – that it’s finally happened. And it’s about time.”

PlierPants is a collaboration between artist Matthew Daley and writer Cory McCallum. Together, they produced Errol Dynamic, a 24-page full colour comic they launched at TCAF this year.

“It’s been really positive these past two days,” said Daley. “It’s been overwhelming, to a degree.”

“‘Overwhelming’ is the word I hear from almost everybody on the floor,” added McCallum. “We’re excited to be taking part in something that has so many interesting and exciting people working in it. Sitting tables away from legends of the industry and brand new talent has been an awesome experience.”

In fact, many artists selling their work at the fair for the first time experienced an outpouring of success. Mark Connery, whose first book Rudy, an anthology of individual comic works he has independently produced for twenty years, launched his book at TCAF and had sold all copies by the end of the first day.

“We were happy to get [that] book before it sold out,” said McCallum.

Ultimately, the festival celebrated all artists, both new and established, as equals in their craft – and it’s perhaps for that reason that the event successfully drew in countless attendees.

“It seemed like a small space, so I was very worried at first,” said Howard.  “But there have been so many people here, and everyone has been so nice. It’s just an awesome place to be.”