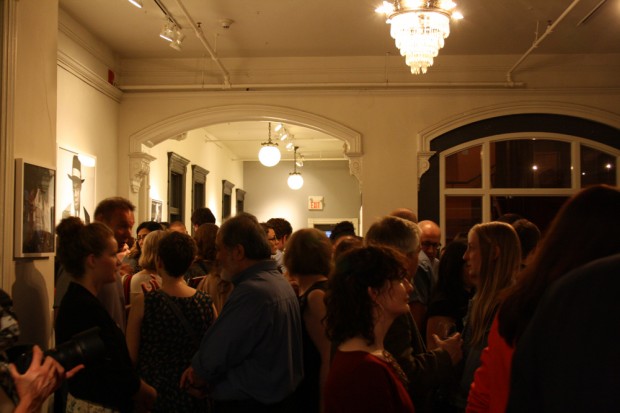 Hundreds of people gathered on Wednesday evening at the Gladstone Hotel to celebrate the launch of Humber’s first literary magazine, the Humber Literary Review.

Within the large crowd of attendees were friends, contributors and literary and art enthusiasts eager to pick up their copy of the magazine and enjoy the atmosphere of the event

“It’s a fantastic turnout tonight, we’re thrilled,” said Wendy Phillips, editor-in-chief of the Humber Literary Review and professor of English at Humber’s north campus. “It’s a great crowd.  we’re overjoyed that so many people could come out from so many different circles.”

The event also provided a chance for the HLR team to receive some initial feedback of the publication.

“We’ve had some wonderful feedback, not only from the contributors, but from bystanders and so on,” said Phillips. “We’ve had people really get excited over what comes next, because it’s a new journal.”

Vera Beletzan, the magazine’s publisher, said people are thrilled that there’s a new journal on the horizon.

The large turnout was considered a big success by the HLR team, particularly due to a conspiracy of hindrances that evening, ranging from uncooperative weather to problems with community transit.

“It was raining and there was tons of lightning,” said Hillary Rexe, managing editor of the Humber Literary Review and professor of English (continuing education) at Humber’s north campus. “We heard that there were problems with Queens St. W. streetcars, and still it’s been packed since 7 p.m. so it’s really exciting and really encouraging.”

The magazine itself has been met with a positive reception, a fact which has encouraged the HLR team to immediately set their sights for the next issue.

“Tonight is the night we get to celebrate the first issue, and then tomorrow we’re right back at it,” said Rexe.

“The goals stay the same,” said Phillips. “[It’s] to be a new journal that attracts the best craftsmanship, that isn’t slavish to literary fashion or visual fashion, but that acknowledges those fashions.  It’s to find the best work, to attract best work.”

And the pursuit of that goal establishes the Humber Literary Review as an important publication, not only for Humber, but for artists, writers and readers alike in Canada. The team’s mandate is to engage in those platforms to provide a high-quality and noteworthy journal available to artists and writers both new and established.

“For us, I think it’s always been about making something great,” said Rexe. “Canada has lots of great publications, but we really want to be producing something where we can support young artists and young writers and to have space for older writers to mentor younger writers.  We’ve wanted to make something that people are going to enjoy, because that’s what it’s all about.”

Issue One of the Humber Literary Review is out now. For more information, visit the magazine’s website at humberliteraryreview.com