Are the 2013-14 Raptors the best squad in franchise history? 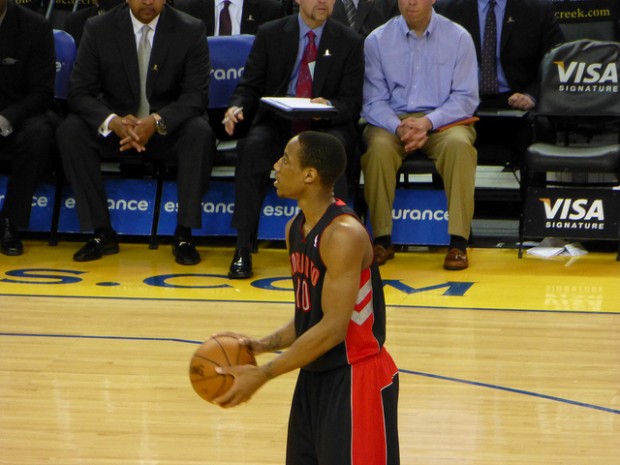 The Toronto Raptors tied a franchise record 47 wins last night after their 116-107 victory over the Detroit Pistons last night.

A victory tonight over the Milwaukee Bucks would give them a franchise best 48 wins. Considering their poor start to the season, questions arise as to whether this is the best cast in the Raptors 20 year history.

The Raptors saw their greatest success when they defeated the New York Knicks 3-2 in a five game series to reach the second round. The Raptors, led by Vince Carter, entered an epic seven game series against Allen Iverson and his Philadelphia 76ers squad. The series came down to an emotionally charged game 7, where Vince Carter’s final missed shot resulted in the Raptors being eliminated from the post-season.

“I’m still partial to the 2000-01 team that starred Vince Carter,” National Post basketball reporter, Eric Koreen. “I think that team would beat this team in a seven-game series, although it would be close.”

Koreen said he thought the current squad was wrapping up the best regular season of any Raptors team from the past.

Dwane Casey’s contract with the Raptors is up after this season and multiple players have expressed their joy having him as a head coach during the turn around.

“Masai Ujiri keeps his cards close to his chest, but I believe Dwane Casey will be back. He clearly has his players’ ears, which is the most important thing given that the team is still trying to build its talent base,” Koreen said.

“The 06/07 team had a better record compared to the rest of the league, but this squad is more balanced, likely to finish in the top-10 in both offensive and defensive efficiency for the first time for any Raptors team,” Koreen said.

The Raptors clinched a playoff spot for the first time in six years. They are projected to face the Washington Wizards but could end up playing the Brooklyn Nets or the Charlotte Bobcats. JD Bunkis, producer and editor for Fan590 Rogers Sportsnet said they team is better of facing Charlotte or Washington.

To hear more of JD Bunkis’ thoughts on the Raptors, listen to the clips below.