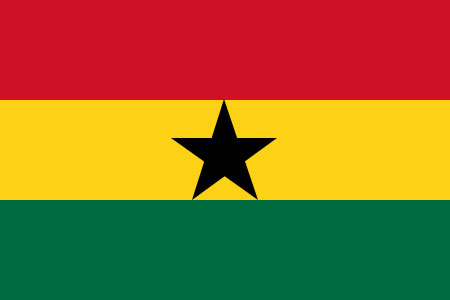 Ghana comfortably reached the final stage of African qualifying after collecting 15 of a possible 18 points in a group containing Zambia, Lesotho and Sudan. They then sealed their passage to Brazil by dominating Egypt 7-3 over two legs.

This will be Ghana’s third World Cup appearance, and third consecutive appearance after reaching Germany in 2006 and South Africa in 2010. It’s very unlikely they will be able to build on their performance four years ago, when the Black Stars became the first African team to reach the quarter-finals.

Ghana’s strength lies in the midfield, where Sulley Muntari, Michael Essien, Kevin-Prince Boateng and Kwadwo Asamoah are most likely to have starting shirts. Essien and Muntari are tough-tackling ball-winners, but they can be reckless; a red card for either would surely sabotage any chances they have of success, especially against such strong opposition as Germany and Portugal.

Kwadwo Asamoah will lead the Black Stars in the midfield.

Boateng can provide the creative spark, but Asamoah has to be the key man. Powerfully-built, fast and skilled on the ball, he is playing incredibly well this season and will have to carry that form into the summer. The Ayew brothers, Andre and Jordan, should also have parts to play in both midfield and attack.

Asamoah Gyan is Ghana’s primary striker, but after leaving England to play in the United Arab Emirates, a vastly inferior level of competition, whether he can carry the load for this team and score important goals is uncertain.

While Ghana only conceded six goals in eight qualifying matches, they were playing inferior opposition and their defence is shaky at best. The majority of their backline is composed of young players who don’t have much experience and will be outmatched in this group.

“They were just drawn in too tough a group,” said Dunlop on Ghana’s chances to make it out of Group G. “I can see them not winning a game.”

Dunlop recognizes Ghana’s ability to score and gives them the possibility of stealing points somewhere, but sees the defence as simply being too weak to progress; they will be on the back foot at all times and while they may able to hold off Germany and Portugal for parts of the game, the pressure applied on them will simply be too much. Even the USA is capable of attacking, according to Dunlop, and Ghana may have a disastrous tournament.

Luck needs to shine on them to have a chance at progression, for Reed. But after Germany, he thinks Ghana may be able to challenge Portugal for second place.