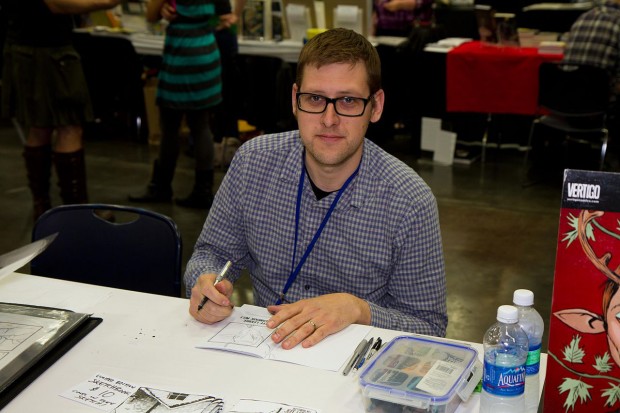 A Toronto-based comic artist is looking to create a positive role model for Aboriginal people in Canada.

Jeff Lemire first caught the attention of DC Entertainment, known for superheroes such as Batman and Superman, with his graphic novel trilogy, Essex County, which is based on his rural upbringing in southwestern Ontario.

After working on multiple titles, including: Superboy, Justice League Dark and Green Arrow, Lemire landed Justice League America. Historically one of DC’s most popular titles, there would be high expectation for Lemire to create a successful storyline to continue the series.

It might have come as a surprise then when he pitched the idea to bring the Justice League to Canada.

“Not just put the CN Tower in the background and call it Justice in Canada,” he told CBC News. “I wanted to put it in a rural setting because I think that’s a really interesting thing: to take these big, bombastic superhero stories and put them in a very quiet setting, where you normally wouldn’t see those characters.”

Lemire took it one step further; not only would he be relocating the classic hero group to Canada, he has created an entirely new Canadian character to join them.

An interest in First Nation’s stories and the desire to tell a narrative from another perspective than the typical one, influenced Lemire to create Equinox: a 16-year-old  Cree girl  from Moose Factory, Ont. named Miiyahbin.

“Creating a teenage female superhero was interesting to me because, generally, most superheroes are white males. We need diversity and we need different personalities,” Lemire told CBC News.

Equinox will feature in a five-part story arc, written by Lemire and featuring artwork by Mike McKone, and will debut in April.

Adar Charlton, an English PhD student specializing in Aboriginal literature at the University of Saskatchewan, sees Lemire’s character as a positive image needed to change the views towards aboriginals.

Lemire spent time up north in Moose Factory and Moosonee, in grade school classrooms and speaking with locals, to get a real sense of their culture and “take away all that stereotypical imagery and get down to principles.”

This is important for Charlton, who said an accurate representation would be fundamental to the character’s success, because it would have to counteract all the negatives stereotypes that all alive today.

“I have no idea how she will be represented but I think it’s a very positive thing that the illustrator spoke with the community to see what a positive representation would look like,” she said.

It’s unclear yet if Equinox will become a permanent character in the Justice League after this five-part storyline, but according to Charlton, whether the character survives or not, it can create positive change.

“If it empowers aboriginal people … there’s potential for a wider, longer lasting affect for sure, if it’s inspiring to others.”