The Sardine Award: who gets the blame for crowded commutes? 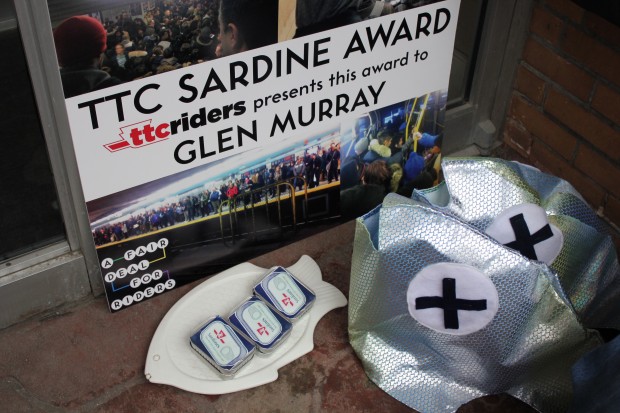 If the TTC is sick, there’s some confusion among transit advocates about the diagnosis, as well as the cure.

The advocacy group TTCriders, dressed as sardines, literally laid the blame on the doorstep of Ontario Transportation Minister Glen Murray, awarding him the sarcastic “Sardine Award” for failing to “fix public transit.”

The demonstration was part of the group’s #ttcsardines campaign, which has been encouraging TTC riders to share pictures of overcrowding over social media. Friday, as part of a roving protest which included a streetcar ride, the costumed protesters placed their award in the entrance to Murray’s community office in Cabbagetown, while calling for a higher provincial subsidy for the Toronto transit system’s operations.

“We are not blaming this on TTC management or TTC workers,” said Jennifer Huang, an organizer for the Toronto & York Region Labour Council. “The problem is the province does not fund it enough.”

“The simple truth is the TTC is underfunded.”

Huang said riders are being asked to pay more for transit, while facing service cuts and longer wait times.

“When that bus comes, it is so packed that we are like sardines,” said Huang.

TTCriders spokesperson Herman Rosenfeld said there’s not enough funding to pay for the operations of the system.

“The TTC operations does not get regular funding from the province anymore,” said Rosenfeld. “It used to.”

PC Premier Mike Harris cut the provincial operating subsidy in 1998, after amalgamation, and successive governments have yet to restore it.

“This is not for expansion, this is simply to make it not so crowded, and that could help to pay for increasing capacity by about 20 per cent by putting more buses on, for signalling – it means some buying of capital equipment.”

This money, Rosenfeld said, would also go towards a 20 cent reduction in fares which would especially benefit low income people who depend on transit.

The transportation minister, however, said the blame is misplaced and that there’s some confusion between where Toronto’s transit fix really lies.

“The primary reason the system is overcrowded is not the operating budget, it’s the capital budget,” Murray said.

“We have a $50-billion rapid transit infrastructure investment that we are almost $20 billion into, and we are paying for 90 per cent now of all of the capital investment.”

“In 2006 the City of Toronto Act was passed and the city of Toronto got more taxing authority to raise more new revenues for transit and other things they want than any other city in Canada.”

Murray said city council, under Mayor Rob Ford, eliminated some of these revenue streams – such as the vehicle registration tax – and reduced others, or used them for anything but transit.

“We’ve given the taxing authority and they don’t use it,” Murray said.

“Use what you’ve got first, before you ask for more.”

Murray also levelled his sights at the federal government, which he said has a terrible record when it comes to transit investment.

Asked what his acceptance speech would be, were he not at an announcement in Waterloo that day, Murray had this to say:

“In a city where Rob Ford has led this so-called end of the war on the car, which has almost created a war on everybody else, is a problem. I just think it’s ridiculous, and humorous, and I’ll take it with the sense of humour I have, but I’m hoping they’ll take that energy to the people who are actually not investing in transit.”

“I think the intentions are good of the group,” Murray said. “But I think their criticism is misplaced.”