Student voters in Quebec turned away at the polls 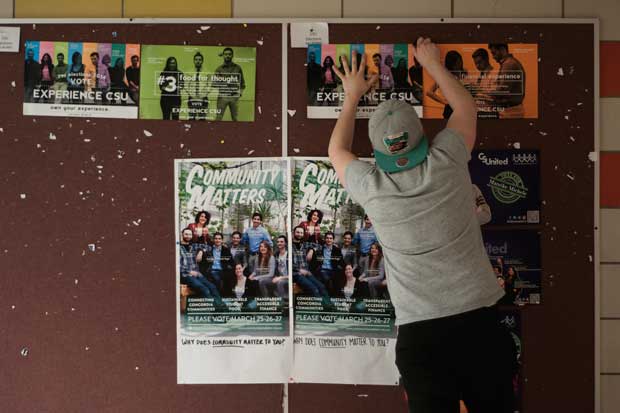 College and university students in Quebec were able to vote for the first time Friday at on-campus polling stations in the run up to the province’s general election. But before some students even made it to the polls, they were turned away.

“We’ve had dozens of students come forward who say they’ve been denied registration,” said Melissa Wheeler, president of the Concordia University Student Union. Once young voters identified themselves as students, they were asked to produce further proof of residency in Quebec, Wheeler says.

“[Students] are commonly rejected based on the fact that they don’t have a Quebec health card,” said Wheeler. “You can only apply for a health card if you’ve been living in Quebec for 12 months, not if you’re a full-time student.”

One of three anglophone universities in Quebec, Wheeler says that over 10 per cent of Concordia’s student body is from outside of the province.

The problem lies in the issue of domicile, which the Quebec Civil Code defines as “The place where a person ordinarily resides, the one he gives as a reference for the exercise of his civil rights and that he indicates publicly as being his domicile.”

.@electionsQuebec needs to clarify the definition of a “domicile” given problems related in @arielle_van‘s post http://t.co/hoT7Cc6yOg

In order to vote in the provincial elections you have to be domiciled in Quebec, says Hans Rouleau, registrar at Bishop’s University. He has been acting as the liaison between Elections Quebec and the school. The majority of students at Bishop’s are English-speakers, says Rouleau, and about 40 per cent of students coming from outside of Quebec.

“What [Elections Quebec] is looking for is people who have decided to make Quebec their permanent residence,” Rouleau said. “Anybody who has a lease, has transferred over their license and their health card and what have you.”

When asked if out-of-province students will be able to vote at the polls on Friday, Rouleau says students would have to consult the office of the General Elections Director (DGE) for Elections Quebec. “If the student is just coming, studying here and  returning home for work purposes during the summer time and then coming back [to Quebec], the quick answer is no,” he said. There may be exceptions though, Rouleau adds.

@McGillU student (me) rejected as voter in Quebec election despite living in province since 2009 http://t.co/SeIiz6betU via @nationalpost

But according to the province’s Civil Code, if domicile can’t be determined, residency in the province must be proven, Wheeler says. When students attempt to prove residency with any document sent to them by the provincial government, they are told it’s not sufficient.

“[Students] are not told what other documents they should bring,” Wheeler said.

“A lot of people have been turned away because of what we in the student government see as a faulty process.”

The CSU is looking to attract media attention to the issue and ultimately hopes to bring it to the attention of the Chief Electoral Officer for Quebec.

Students will be able to vote on-campus up until Wednesday, April 3. Quebec’s general elections will take place April 7.