Soknacki speaks with voters in Reddit ask him anything 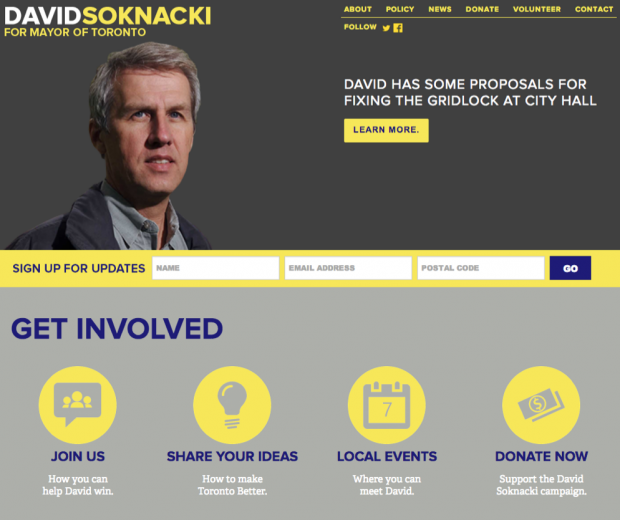 Toronto mayoral candidate David Soknacki logged on to the popular social network Reddit to speak with voters on Monday.

Soknacki took part in what was suppose to be an hour-long AMA (Ask Me Anything) chat, where Reddit users asked him anything they wanted.

Reddit is a platform that allows people to ask questions to a participant, who can then respond publicly to questions they choose.

Soknacki was in a “wild” mood according to his official Twitter page and that is why he decided to keep going.

He answered a wide range of questions that touched on his stance with transit to the expansion of a downtown airport.

Soknacki is one of the latest Canadian politicians to hop onto the Reddit AMA bandwagon after Ontario Premiere Kathleen Wynne made headlines when she used the Reddit platform last month.

Wynne was criticized for answering only 10 questions in her hour session.

While Soknacki was quite active in his time on Reddit, he addressed some of the criticisms he’s faced as to why Torontonians should vote for him over other candidates like Olivia Chow.

He also answered questions on whether he thinks he has a real chance of winning the race after a recent mayoral poll from Forum Research suggested Soknacki only holds two per cent of voter support.

The poll, which was taken after Chow joined the race, shows that she’s currently in the lead with 36 per cent of votes, followed by Toronto mayor Rob Ford with 28 per cent, John Tory with 22 percent and Karen Stintz with 5 per cent.

While Soknacki was faced with the inevitable questions about Ford and the lack of support for his own campaign, he urged that voters elect the candidate they feel fit their ‘ideal criteria for a mayor.’

He also pointed out that early front runners in polls don’t necessarily indicate who will win an election.

Soknacki didn’t shy away from controversial issues that looked at his own responses and choice of words in the media.

He eventually admitted that he should choose his words more carefully in one instance.

Soknacki  left some users impressed with his transparency.

“I was pleasantly surprised and happy that he answered so many questions for so long. Not a lot of politicians would do that and I feel like I can see where he’s coming from a lot more clearly now,” said Elizabeth Rojas, a first year General Arts student at Humber College.

Rojas, who was participating in the Reddit AMA, added that she now finds herself unsure of who she’ll vote for but happy that politicians seem more accessible.

“Anytime there are politicians that are getting in touch with the public, I think we should be happy about it,” said Susan Delacourt, a senior writer covering federal politics for the Toronto Star, told Humber News.

While Soknacki’s media representative wasn’t available for comment, Soknacki’s Twitter page asked for any additional questions that weren’t answered to be sent to his personal email david@soknacki2014.com.

The first televised mayoral debate takes place next week on March 26 and polls officially open for Torontonians to vote on Oct. 27.