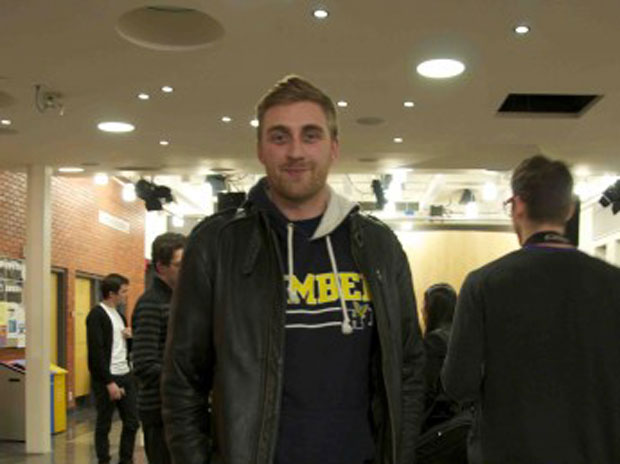 By Adam Kozak and Kat Shermack

Shawn Manahan has been elected president of the Humber Students’ Federation. The HSF website announced the win on Friday just before seven p.m., following a nearly two hour long all-candidates meeting that was held after the polls closed.

Shawn Manahan is the new HSF president | Photo by Kathleen Jolly via humberetc.com

(The full list of winners can be found here.)

This news comes after current president Tim Brilhante was disqualified and removed from the ballot late Thursday night. The reasons for Brilhante’s disqualification are still unclear. Once a candidate is disqualified that person is no longer considered a candidate and, therefore, is unable to launch an appeal.

Manahan said this wasn’t the way he wanted to win.

“But at the same time stuff was done that would have changed the elections and cheapen them,” Manahan said. “When it comes to strikes, breaking the rules enough to get you disqualified…it is what it is. At the end of the day the people that were up there (in the boardroom) deserved to be there.”

After the elections Chief Returning Officer Natalia Toussaint refused to disclose any information regarding any personal strikes (violations of rules) or warnings given to any candidates. She did say the near two-hour delay in announcing results was partly due to the reluctance of some of the candidates to sign the release form indicating they were satisfied with the process and outcome of the election.

“The problem is the whole appeals process is more to do with individual complaints – were you treated fairly, if you had a personal issue,” said Von Doom.  “There’s a huge discrepancy that needed to be explained.”

Brilhante said he would be willing to help newly-elected Manahan step into his new role as president.

“Ultimately, I look forward to transitioning Shawn,” said Brilhante. “I think he’s a good leader on campus, and it would be my pleasure to oversee that he hits the ground running May 1.”

Two disqualified candidates – Tim Brilhante and Karnesh Babaria – at the HSF office at the lakeshore campus just before they announce the winners. Photo by Adam Kozak

I hope Humber and Guelph-Humber students raise their concerns, that it’s not democratically right for @timbrilhante with to have no appeal.

My vote was made for @timbrilhante for a reason, and the same for other students. This disqualification is outrageous. @HumberLife

Finished work to find @HumberLife DQ’d @timbrilhante w/o appeal. How is this democratic?

I am very disappointed in the #HSFElections . Our new president does not represent a majority of students.

So, I wonder how many votes @timbrilhante got considering more people “voted” for VP of student relations at North than HSF President

An online petition was started Friday demanding that Brilhante be allowed to appeal his disqualification. As of Sunday afternoon the petition had garnered 303 signatures. Although powerless to appeal, Brilhante was pleased to see the petition.

“It’s nice to see my fellow students who believe in the values I stand for and the dispute I’m trying to raise. Sign it – it’s always something we can reflect on and use to our advantage. Ultimately the decision rests with HSF. I have to respect it – I may not like it – but I have to respect it,” said Brilhante.

HSF reported over Twitter that 5,470 students voted in the elections. With the total ballots cast for non-disqualified presidential candidates totaling 3,015, it is clear that Brilhante received a substantial number of votes. Manahan received 1,051 votes, edging second-place finisher Mary Ann Savoie who received 995 votes.

“There’s clearly things that need to be re-written, and that’s something I hope to do,” said Von Doom. “Nothing is 100 per cent infallible, but we can certainly try to hone procedures to the point where there aren’t holes, and at least we will have backups for when issues arise.”

Candidates “cannot have posters up in athletics, they cannot campaign in classrooms, they can’t put the posters on HSF boards. Anything that is outlined in a policy that is restricted, those are things they can get a strike for,” Toussaint said.

The policy also warns candidates that the elections administration team can proceed to any of the three steps if they consider the violation severe, though there is no indication of how the severity of the violation is determined.

Brilhante wasn’t the only one to be disqualified during the week of voting. Karnesh Babaria, an international student from India in his second semester in the Global Business program, found out Thursday at 10:45 p.m. that he was disqualified.

He was running for VP of Student Life at the Lakeshore campus, and said the timing of the disqualification made it impossible to do anything about it.

“I put in everything I had,” said Babaria. “I missed my classes. I did not do well on my mid-terms. These are things I should have taken care of, but I was trying to be everywhere.”

He said he would have been hoping for re-instatement, but because of the timing, his e-mails sent to HSF officials were met with auto-responders that conveyed they were out of the office until Monday.

Karishma Ankleshwaria, who was running for VP of Student Affairs at the Lakeshore campus, was reinstated after being disqualified.  No information on how her situation was different than the others was available at press time.