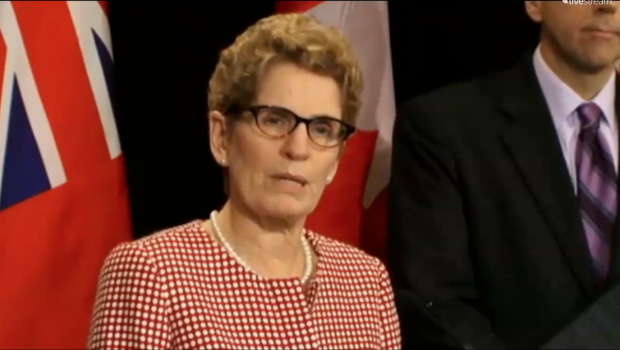 “We want to do government differently, and this is a manifestation of that,” said Liberal Premier Kathleen Wynne.

The legislation would increase the accountability by forcing more elected officials to post their expenses online. Together with Government Services Minister John Milloy, Wynne unveiled the bill on Thursday.

The bill would grant André Marin, Ontario’s ombudsman, significantly more power, Marin has long sought the authority to scrutinize cities that have no independent watchdog of their own.

With an election expected this spring, Wynne is clambering to distance herself from some of the scandals that plagued the Liberal Party under former premier Dalton McGuinty’s leadership.

The Accountability Act would force all three leaders, and all Ontario MPPs to make their expenses public. The measures would require that the officials post expenses for out-of-riding travel, hotel stays, and meals online.

“I came into this office, just over a year ago, saying I was going to do government differently, that we were going to open up and be more transparent, and that is what we’re doing,” said Wynne.

Under the current Open Government initiative, only the premier, cabinet ministers, and their staff are required to post their expenses.

However, the Ontario Ministry of Government Services website has not posted any of Wynne’s expenses since Sept. 30, 2013.

“This is the most corrupt government possibly in the history of Ontario,” Progressive Conservative Leader Tim Hudak said in the House of Commons Thursday. “If you actually want transparency and accountability in government, then change the government.”

Hudak said that his party requested to see what the Liberals billed taxpayers last year, and were told that they’d have to pay $1,200 for the information.

“They don’t exactly have the market cornered when it comes to accountability,” he said.

Hudak and NDP leader Andrea Horwath voluntarily post their expenses online, though neither of the leaders’ data is up to date. The Tories’ expense site has not been updated since June 2013, and until Wednesday afternoon, Horwath’s last published expenditure was in June 2011. The NDP expenses were brought up-to-speed later in the day, and now go until July 2013.

Ontario’s Ombudsman André Marin will be given more power over municipalities, school boards, universities, and what he called “misbehaving mayors.”

As Ontario’s independent watchdog, Marin has been pushing to widen the scope of his power, and has contended that the province fails to hold agencies accountable. Under the new legislation, Marin would have the freedom to investigate municipalities that have not been exposed to independent scrutiny.

“Over the last few months you see a series of issues at the local level. Fraud, nepotism conflict of interest, questionable expense claims, misbehaving mayors,” said Marin on Thursday. “The province contributes $3.5 billion dollars with no strings attached.”

Brampton’s mayor Susan Fennel is being audited after spending $185,000 on travel and hotels over the last five years. The mayor of London, Joe Fontana, is facing fraud charges, and Toronto Mayor Ford has been under fire for using city letterhead to solicit donations for his former football team.

Marin has long fought for oversight of Ontario’s health-care, but his new power will not extend to the sector. He met with Deputy Premier and Minister of Health and Long-Term Care Deb Matthews to talk about introducing a patient advocate.

“When we started meeting with her, she put her foot down, and said ‘well, it won’t be you,’” said Marin.

Instead, a new patients’ ombudsman would be appointed to supervise hospitals, long-term care homes, and community care access centres.

“Is it my perfect solution? Its not,” said Marin. “Can this position have the potential to bring about real change and deal with patient complaints? Yes.”

Marin said he spoke with the premier, who told him that if this doesn’t work, she’d be happy to revisit his position in a couple of years.

The bill is slated to be formally introduced in the next few weeks, and will require the support of one of the other parties to be passed.