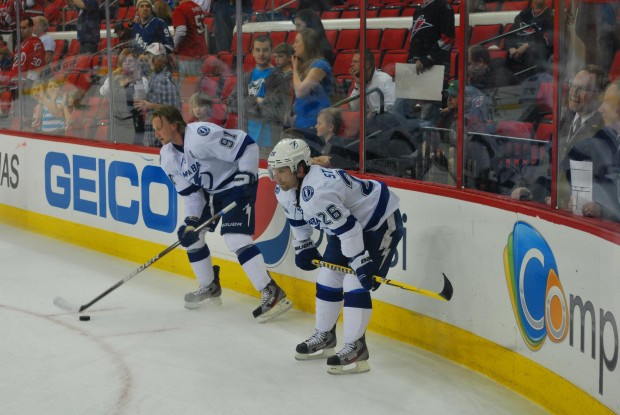 The National Hockey League’s trade deadline came and went and unlike past years, some marquee players found their names stitched on new sweaters.

Martin St. Louis was the most prolific player to be dealt before Wednesday’s 3 p.m. deadline. The reigning Art Ross award winner for most points in a season requested, and received, a trade to New York to join the Rangers citing family reasons.

Rumours started swirling that St. Louis had demanded a trade out of Tampa after he was left off of Team Canada’s Olympic roster. It was the second Olympics in a row that St. Louis found himself on the outside looking in.

Tampa Bay General Manager, Steve Yzerman, was the man in charge of Team Canada both years St. Louis didn’t make the Olympic cut. He was eventually named to the gold medal team as a replacement for his former teammate, Steven Stamkos, who was recovering from a broken leg.

St. Louis has a full no-trade clause, which means he controls what team he is sent to and he requested the Rangers.

“I was able to make a trade that honoured Marty’s wishes to move on,” Yzerman said at a press conference yesterday. “I’m pleased that we were able to make a deal with the New York Rangers which we feel is acceptable.”

In exchange, Tampa Bay received Ryan Callahan, the former captain of the Rangers whose contract expires at the end of the season, as well as New York’s first round pick in 2015, and a conditional second round pick that could become another first round selection.

Another big trade that occurred on deadline day saw Montreal acquire Thomas Vanek from the New York Islanders along with a conditional fifth round pick. The Islanders received prospect Sebastien Collberg and a conditional second round selection.

Vanek, 30, has an expiring contract and is seen as a rental acquisition for the Canadiens. The Austrian left winger has shown a willingness to test the open market as a free agent this summer.

“It’s a really exciting addition,” Canadiens’ head coach Michel Therrien told the National Post. “Thomas Vanek is a prolific scorer who can play on the right side or the left. We all know what he can bring to a power play, too.”

The rebuilding Sabres sent Matt Moulson along with Cody McCormick to Minnesota. Buffalo received a pair of second round picks and Torrey Mitchell from the Wild.

Buffalo also sent recently-acquired goaltender Jaroslav Halak to Washington with a third round pick for another goalie, Michal Neuvirth and defenceman Rostislav Klesla.

In the city of Angels, the Kings acquired Slovakian winger Marian Gaborik from Columbus in exchange for former Leaf Matt Frattin, a second round pick, and a conditional third round pick.

Two Canadian teams made a swap as Edmonton sent veteran forward Ales Hemsky to Ottawa for third and fifth round picks, respectively.

Defenceman Andrej Meszaros was moved to Boston where he will join Zdeno Chara on the Bruins blueline in exchange for a third round selection in the upcoming draft.

Detroit made a deadline deal that sent forwards Patrick Eaves, Calle Jarnkrok and a 2014 third round pick to Nashville for pending free agent David Legwand who will play for his hometown for the first time.

In all, 20 trades were made on the final day. In Toronto, Leafs management decided to stand pat and not make any trades.

Teams are now barred from making any trades throughout the rest of the regular season.