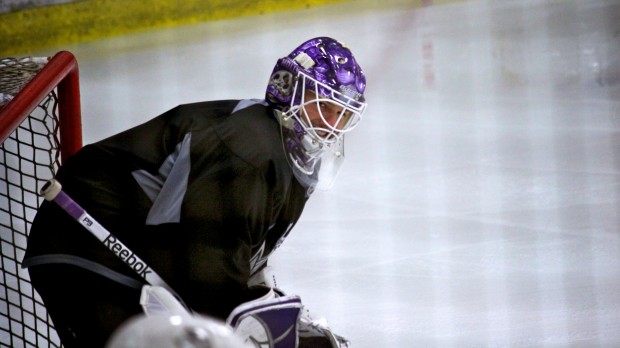 Jonathan Bernier practices with Los Angeles before being traded to Toronto. Courtesy Flickr.

Leafs goalie Jonathan Bernier returns to Los Angeles tonight for the first time since being dealt to Toronto nearly nine months ago.

Bernier has emerged as the Leafs top goalie this season making 1,501 saves in 49 games played. The 25-year-old ranks fifth in the NHL with a .926 save percentage and his 25 wins rank ninth amongst goaltenders.

The Laval-native won a Stanley Cup in 2012 as a back-up with the Kings. Since then, Los Angeles chose to trade the young puckstopper to Toronto in exchange for Matt Frattin, Ben Scrivens, and a second round pick.

“The Kings obviously felt they had some more depth in the organization and they could afford to trade a guy like Bernier,” Glynn said.

Bernier was supposed to be the next great phenom between the pipes for the Kings. He was a star in junior for Lewiston emerging as a top prospect in the 2006 draft. Los Angeles drafted him in the first round, 11th overall, the top goaltender selected.

A year before Bernier’s draft, the Kings selected Jonathan Quick 73rd overall. The third round pick was the seventh goalie taken in the 2005 draft.

The hype didn’t surround Quick the same way it did for Bernier.

“He (Quick) was supposed to be a stopgap while the Kings waited for Bernier,” Glynn said.

The stopgap emerged into much more than hockey experts anticipated. Quick took over the crease in 2008 and never relinquished his starting job.

“He’s used to the pressure. He’s used to being a big fish in a small pond,” Wakabayashi said of Quick.

Quick helped propel the Kings to their first Stanley Cup win in 2012. He was awarded the Conn Smythe Award for being the most valuable player in the playoffs.

“It wasn’t like it went sour,” Wakabayashi said. The Kings “were like, ‘you’re great’, but this guy’s ‘really great.'”

Bernier has proven to be an ideal fit for the Leafs.

Bernier failed to pick up the win against his former team in their first encounter earlier this season in Toronto. Quick did not play that game but is expected to get the start tonight for the Kings.

The Leafs hope to get back into the win column as they continue their difficult road trip through California against some of the elite teams in the league. The blue and white took down Anaheim on Monday before falling to the Sharks on Tuesday.

Toronto plans on leaving the Staples Center tonight with a victory. The puck drops at 10:30 p.m. ET.