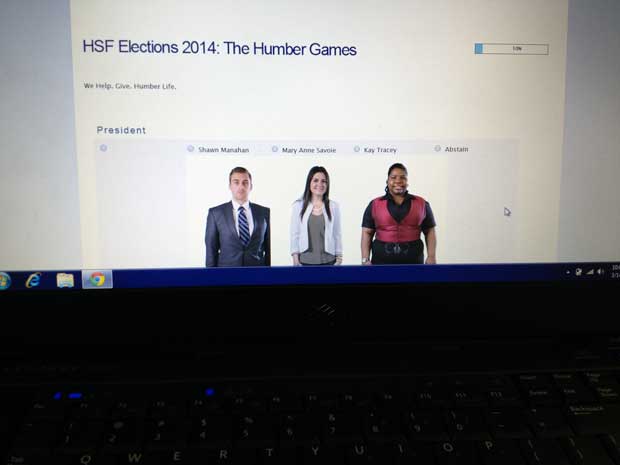 In the aftermath of a controversial election decision at Humber, questions are being raised about how HSF election rules compare to those in other jurisdictions.

An HSF board of directors meeting Wednesday grew heated as members discussed current president Tim Brilhante’s disqualification from running again because of violating a three-strike policy.

Brilhante received four strikes and was disqualified by Chief Returning Officer Natalia Toussaint. In a statement posted on his Facebook page Sunday, Brilhante said the strikes included alleged endorsements from people tied to HSF clubs, campaigning in a restricted area, and failing to delete a campaign photo from a Facebook page at the end of the campaigning period.

Toussaint has yet to confirm that those were the reasons for her decision to disqualify Brilhante.

At Algonquin “you have to be a member of the board before you run for president and vice-president,” said the manager of marketing and communication.

Once those positions are filled, Thomlinson says, the student association moves on to their election process.

There is also no three-strike policy at Algonquin, Thomlinson says. Once a candidate has broken a rule they can be disqualified right then and there, she said, citing a case where a candidate was disqualified for campaigning past the allotted time.

At the provincial level, a candidate cannot be disqualified in the midst of an election.

“There are a set of offences which we can investigate, but only after a complaint has been made,” said Andrew Willis, the communication coordinator at Elections Ontario.

An investigation could lead to a candidate having to forfeit the office they have been elected to, but that action is taken after an election ends.

“Everything is retroactively applied,” Willis said.

According to the Ontario Elections Act, in a case where a candidate withdraws after election ballots have already been printed, notices about the withdrawal must be posted in conspicuous locations at every polling station and that any ballots cast for that candidate are considered void.

In a case where a candidate is disqualified during the voting process, she says, a re-election would be the best way to determine accurate results.

“The research shows that people develop their preferences in relation to the specific set of options put forward to them,” said Stephenson.