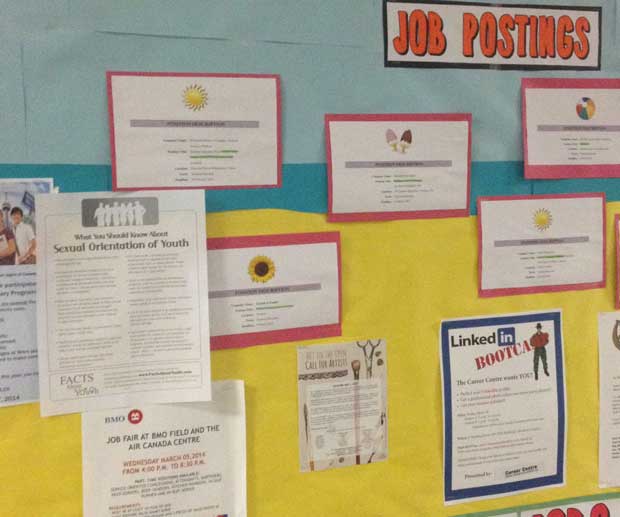 v A homophobic poster was found in several places on campus, including the Career Centre’s summer job board.

Posters with controversial statements about homosexuality, including that it is a medical condition, were found at Humber College’s North Campus on Thursday and student officials say the posting was done without any approval.

An excerpt of homophobic comments found posted on campus.

The posters are titled “What you should know about sexual orientation of youth,” and contain a great deal of homophobic statements.

Among other comments, the posters say validating a young person’s homosexuality can be harmful, and that the homosexual lifestyle comes with grave health risks. The posters also discourage schools in general from allowing clubs that support homosexuality.

Humber News was notified late Thursday that at least one other poster has been found on campus.

While two of the posters were found on HSF bulletin boards, the student association was quick to deny involvement, and strongly disagree with the content.

“These posters were not something approved by HSF,” said Natalie Bobyk, communications director of HSF. “We do not support anything that was on that poster.”

Bobyk explained that all posters on HSF boards must be brought to officials for approval.

“Posters need to be something happening on campus that is available to all students,” Bobyk said. “Once something is approved, it’s stamped. There was no stamp on this poster, which means it’s just someone going around putting these posters up without approval. Something like this is completely out of line.”

“I would advise removing the posters and recycling them right away,” Bobyk said. “I don’t think anyone wants to see that.”

The organization named on the poster is the Florida based American College of Pediatricians. The organization, formed in 2002, runs factsaboutyouth.com, a website designed as a resource for educators, parents and students.

“Facts About Youth is a resource designed to give important science-based information about healthful approaches to youth who may be conflicted about gender identity and sexual orientation,” the website states.

The poster found at Humber College is available on the website for anyone to print and post.

Members of the Humber community were disappointed to see this type of literature posted at Humber.

“It’s ridiculous,” said Meg Houghton, Director of Student Access, Wellness, and Development. “Any comment that marginalizes any group is unwelcome. No one here would ever endorse anything like this.”

“I think this is a community deeply committed to creating a welcoming environment, student and faculty alike,” Houghton said. “This reeks of a one-off rogue act of an individual who knows this would never have been approved through the appropriate channels.”

The college’s Centre for Human Rights, Equity, and Diversity is urging any student seeing the posters to notify campus security.